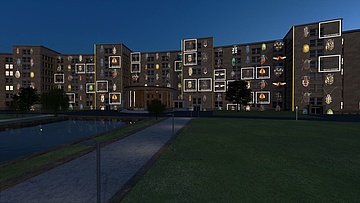 When the novel coronavirus first spread to Germany, major events such as concerts and trade fairs, some of which had been planned at very short notice, had to be cancelled. These included the international trade fair Light + Building, which was also to host the Biennale of Light Art, the LUMINALE. Despite the cancellation of the trade fair, the organizers held on to the LUMINALE until the very end, as it was supposed to inspire visitors with installations by national and international light artists at many different locations and mostly outdoors. But just a few hours before the scheduled opening, the plug was pulled and the LUMINALE was cancelled.

For the organizers, but also for the many artists, this was a bitter disappointment, especially since all the long prepared festival contributions had been produced and were thus ready for use. Now, three weeks after the cancellation, the Luminale will take place after all - at least in digital form. Under the hashtag #luminaledigital on www.luminale.de and on all digital channels of the Luminale, those interested will be given a virtual look at numerous light art contributions. On view are numerous photos, but also videos of the projects taken during the set-up, dress rehearsals or during the press tour on the eve of the opening.

In addition to these beautiful impressions, the AR app "Sunbeams" is also available, which belongs to the virtual reality installation "Sunshowers" by Marija Avramovic and Sam Twidale. The fairytale-like installation was actually meant to bring a scene from Akira Kurosawa's cult film "Dreams" into the digital age. The AR app "Sunbeams" is an extension to the planned installation, which was supposed to let the characters act in urban space - which is now just moved to the living room at home. The app can be downloaded at https://sunbeams.land/.

Not for the eyes but for the ears are the images created by Nouria Behloul's radio play "Gedankenverlauf VII," which describes a walk through and with thoughts about the body in the city, the city in the everyday, the everyday in the body. Ideally, this piece would have been heard during a tour of the Friedberg complex, but one can also listen to the thoughts of the artist, who incidentally also helped design the Luminale program, from the comfort of one's own home. Nouria Behloul's piece can still be found in the projects on the Luminale website.

Although the digital version only hints at the real LUMINALE experience, it is a nice way to introduce the different works and bring a bit of the fascination that these light artworks would have caused on site into the living rooms of Frankfurt's residents. You can find the photos and videos at: https://www.luminale.de/startseite/