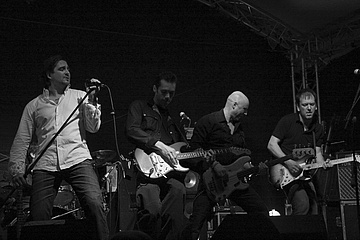 In autumn 2016, the fans of Eintracht Frankfurt were called upon to compose songs about their favourite club under the motto "Music from fans for fans". The best compositions were then selected from more than 100 entries, which were recorded in Studio 11 in the Commerzbank Arena, as directly on the holy lawn, by musicians such as Gastone, the Azzis with heart or the Squeaky Boys. The songs were produced by the legendary Frankfurt DJ and producer Ralf Holl. A real passion project, which of course also included a Frankfurt band: The Madhouse Flowers! </Since 1993, the band has been delighting audiences with their very own interpretations of well-known hits at regional events such as the Sound of Frankfurt or the Schlossgrabenfest, the Open Doors or the Museumsuferfest. But also beyond the Äppler border the Madhouse Flowers regularly bring the crowds to boiling point. Of course, the six-piece band was also immediately involved in setting a musical monument to Eintracht with their contribution to the CD "Eintracht CD12 Vol.4". And so they recorded the "Eintracht Frankfurt Waltz" (music & lyrics: Stefan de Gockel) in Studio 11. </p>

now the Frankfurt cult band finally presents the official music video for the song, produced by BEMBEL BEAT - Holl & Vieth. A catchy hymn that you can not only sing along but also a well-groomed waltz can be played! So, watch the video and then…

… "go home and tell everyone - the miracle of the Main!

More information about the Madhouse Flowers can also be found at https://www.facebook.com/madhouseflowers/