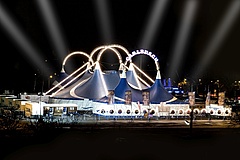 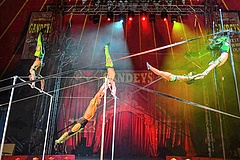 The new show program of Circus Carl Busch was celebrated with thunderous applause and beaming children's eyes. For the seventh time already, the traditional circus makes a guest appearance with its GREAT CHRISTMAS CIRCUS in Frankfurt. Until January 5, 2020, a first-class mixture of breathtaking artistry, humor and music can be seen in the big circus tent on the festival grounds on Ratsweg. Once again, the circus has succeeded in presenting a traditional circus experience on the cutting edge. This becomes clear right at the beginning of the new show, when six top Cuban artists show how spectacular rope skipping can be with a lot of charm and infectious joie de vivre.

Even when Vera Kopeck&aacute; juggles fire wheels with her feet or Maud Florees Gruss balances with elegant grace on the high wire, when Georgio Hromadko lets his diabolos fly through the circus tent or the circus offspring presents a charming pony dressage with the little Angel Wille, then this ensures especially, but truly not only with children for very great enthusiasm. It is also fascinating to see what the three-time Guinness World Record holder Alesya Gulevich can do with hula hoops and how simple the extremely challenging handstand acrobatics of the Kolev Sisters actually look. No wonder that the young sisters were celebrated with especially thunderous applause.

Quite big highlights of the new Christmas show are the Flying Wulbers, who present spectacular performances like a triple Salto Mortale high under the circus dome, as well as the Havana troupe from the Cuban State Circus, who perform truly spectacular things at the square bar.

After about two and a half hours - a twenty-minute break included - the visitors leave the tent in a good mood and enthusiastic. And again it is mainly the children who, filled with impressions and joy, quickly hop into the ring again, romp around in the foyer or insist on a souvenir selfie in front of the tent. One can already be happy about the fact that it was announced at the farewell that the Great Christmas Circus would like to come to Frankfurt again next year.