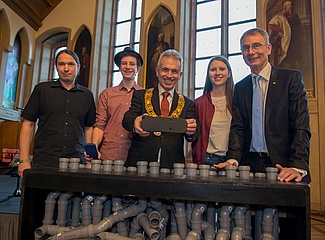 There are events and institutions that really deserve to be celebrated. One of them is undoubtedly the Abenteuerspielplatz Riederwald e.V., which has been organising the Main and Opera Plays every summer for a quarter of a century now and has made countless children happy. Whether it's face painting, bouncy castles, roller slides or painting and handicrafts - year after year, Frankfurt's children are offered a really great programme during the summer holidays - and most of it is free of charge. A good reason, therefore, to celebrate the anniversary with a ceremony. In the kaisersaal, many players of the adventure playground Riederwald were therefore welcomed by the magistrate last weekend to celebrate together. "Exactly 25 years ago today, the board of the Riederwald Adventure Playground decided to create a children's programme to mark the 1200th anniversary of the city. In doing so, you gave the starting signal for a permanent fixture for Frankfurt families in the summertime: the Main Games and the Opera Games," Mayor Feldmann welcomed the numerous guests. The games not only make the city more colorful, but are also ambassadors for the fact that Frankfurt's children belong in the middle of the city, the Lord Mayor continued.

"The Main and Opera Games are a special and, above all, attractive offer for families who cannot afford a vacation during the summer holidays. They are thus a significant part of our common fight against child poverty, our endeavour to ensure that all children - regardless of their purse - can participate in the social life of our city," Feldmann elaborated, summing up the gratitude of many parents. He thanked the Abenteuerspielplatz Riederwald e.V. and its long-standing chairman Michael Paris for their energetic commitment: "Today, we acknowledge and expressly thank the City of Frankfurt for having the Abenteuerspielplatz Riederwald e.V. with its chairman Michael Paris at its side as a reliable partner for our children and families - and not just since yesterday, but for decades."

Michael Paris elaborated in his speech that the Main and Opera Plays are the only events from the festive programme of the 1200th anniversary of the city of Frankfurt am Main that have not only "survived" to this day, but have also become a significant location factor in the city's marketing. "The Main and Opera Plays are the largest children's cultural event in the Rhine-Main region during the summer holidays. Up to 3,000 visitors a day come from Mainz to Aschaffenburg and from Giessen to Heidelberg to attend the largely free play event in the heart of the city of Frankfurt," Paris said verbatim.

Frankfurt tourism is booming, so it is not surprising that half of the visitors already speak English with the attendants. "With the Opera Games, we have shown that it is possible to make inner-city areas playable for all generations at a low financial cost, Paris said. Twenty-five years ago, we succeeded in incorporating the river and its banks into urban life and making the waterfront a play space for young and old alike." In conclusion, Paris expressed his hope that ten years after the closure of the "Adventure Planet" on the Riedberg, the city would finally succeed in once again sponsoring a non-profit indoor playground as a winter offering.

Musical performances by the Bergen-Enkheim Music School and the Borm/Richter duo, as well as lively conversations over a snack, rounded off this special anniversary.