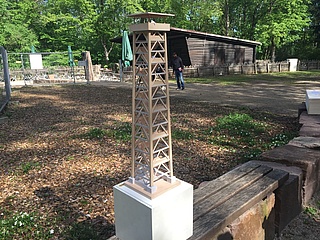 It's coming along. And if all goes well, Frankfurt will have their beloved landmark back next year. Because last week, the magistrate of the city of Frankfurt am Main set the construction and financing for the reconstruction of the Goetheturm on the way. The city councillors still have to decide in September. But that should only be a formality. After that, construction can begin soon.

About the importance of the reconstruction is also aware of Lord Mayor Peter Feldmann: "The Goetheturm is for us Frankfurt heart affair," he says. "The people of Frankfurt have been committed to collecting almost 200,000 euros in donations for the reconstruction. The destruction of the tower in the night of 12 October 2017 has made many citizens sad and also angry. The reconstruction in its original form is so desired by the population - for this we have now paved the way."

Baudezernent Jan Schneider emphasizes: "Today's decision is good news for the city. The new Goetheturm will look exactly like the old one, with which many Frankfurt residents associate very personal memories. However, the structure not only complies with today's regulations, it will also be easier to renovate and maintain in the future." Stairs and landings, Schneider explains, will be partly made of a steel structure to make them more durable and prevent vandalism.

For environmental department Rosemarie Heilig, with the Goetheturm, the city forest will also get its landmark back. "The willingness to donate alone shows: The people of Frankfurt identify with the observation tower built in 1931. The play park created around the tower is still a popular destination for excursions today, and the reconstruction will now give it back its identity." The open spaces around the tower would be restored, and nine trees would be replanted.

The investment is around 2.4 million euros, with around 2.1 million euros coming from the insurance sum of the old tower. All additional safety measures and for the redesign of the outdoor facilities are to be borne by the city. This is also where the donation sum of over 195,000 euros comes into play.

The Goetheturm in Frankfurt's city forest had burned down completely due to an arson attack. The tower was an important landmark of the Main metropolis and a popular destination for excursions. In an online survey, 78 percent of the citizens opted for a reconstruction as close to the original as possible. In accordance with the wishes of the citizens, a wooden half-timbered construction is planned on the existing foundations. However, a completely original reconstruction of the tower is not possible due to current standards. The outer geometry of the old Goethe Tower from 1931 will be retained, the tower will be 43.30 metres high again. Changes compared to the historical model mainly concern details and materials as well as the adaptation of stairs and landings to current regulations. In turn, individual components should be easier to replace, so that the tower does not have to be closed or scaffolded for minor repairs.

So let us already look forward to our new old Goetheturm, which hopefully can be presented to the public as planned for the Goetheturmfest 2020.