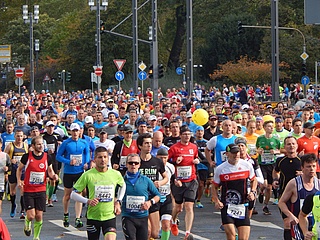 When thousands of runners take part in the Frankfurt Marathon again on 28 October, the 42.195-kilometre route will once more be transformed into the city's biggest street party. This sporting event will be celebrated in a particularly cheerful manner at 80 hot spots, as the 37th edition of the Mainova Frankfurt Marathon has a special supporting programme to offer. This will be ensured by around 2000 artists, musicians and helpers who will be in action on this day at a wide variety of course festivities. Also 20 Frankfurt clubs are involved to entertain the spectators in the best possible way. This will create an atmosphere that will be transferred to the runners when they cheer for them. Ten moderators will also be on hand to help along the roadside. In addition, the live broadcast of the hr television (9.55 am to 2 pm) can be followed on five large video screens in the city area.

But the atmosphere will not only be great during the run itself. Proven ingredients such as the Fattoria La Vialla Pasta Party in the Festhalle, the Marathonmall on the exhibition grounds, the Brezellauf powered by interAir, the Struwwelpeter Run powered by Schneider Electric and the Schneider Electric Mini-Marathon will ensure this.

The marathon runners will once again run on a veritable carpet of sound on October 28. Shortly after the start, hr1 will welcome the runners at the Platz der Republik with presenter, DJ and the hr1 marathon charts. The hub and heart of the course is and will remain the Opernplatz, which the participants will cross four times. A nest of atmosphere is always also the Hauptwache, where the ASB-Spendentor stands.

Other highlights along the marathon route are the MyZeil Hot-Spot on the way to the Eschenheimer Turm, the Zillertal Tourism Truck on Rossmarkt and the All Nippon Airways Hot-Spot with a large airline inflatable and traditional Japanese Taiko drummers on Kaiserplatz. Runners and spectators alike will also be treated to a packed programme in the city districts on both sides of the Main - a 42.195-kilometre party mile, so to speak.

The Mainzer Landstraße will once again be particularly densely populated with atmosphere makers for the participants. There, in the critical phase for many runners from kilometre 32, the so-called man with the hammer has to be loudly beaten into flight. Two Frankfurt running groups, the Urban Runners and WERUNFRANKFURT will set up their own cheering zones along the course.

Asics will set up a "Flamme Rouge" at kilometre 41.195 to send the runners into the last 1000 metres of the race with a great atmosphere. And then it is reached, the Frankfurt Festhalle, place of longing and destination of the participants. There the atmosphere boils up year after year when the presenter duo Kai Völker (hr1) and Frank Piontek together with thousands of spectators welcome the runners.

Naturally, an event like this also brings some traffic obstructions with it, which this year are partly of particular explosiveness, since on 28.10. is also elected. So find out in time if and how you will get to your polling station!