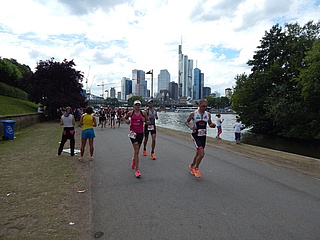 While with the Frankfurt Marathon only recently a major sporting event in Frankfurt was cancelled, on Sunday, August 15, the "iron men" and "iron women" are allowed to start at the IRONMAN EUROPEAN CHAMPIONSHIP FRANKFURT this year. This year will be different: There will be no course hotspots where there will be regular cheering parties for the athletes this year due to the Corona pandemic. Only relatives are allowed at some closed-off areas such as at the Langener Waldsee or at the finish on the Römerberg. These can register (with test, vaccination or convalescent proof) from Thursday (12.08.) to Saturday (14.08.) during the official registration times at the registration tent and receive a corresponding access ribbon.

The athletic challenge for participants remains the same this year: a 3.8-kilometer swim, 180-kilometer bike ride and 42.2-kilometer marathon run await athletes. However, this also means that there will be traffic disruptions, which will also affect public transport: numerous lines will be diverted, interrupted or suspended. S-Bahns and U-Bahns will not be affected by the Ironman, so they are a good alternative for passengers to get to their destination well, especially in Frankfurt's dense public transport network.

All information on timetables and diversions is available on the RMV service telephone at 069/24248024 around the clock every day and on the Internet at www.rmv.de

The changes in the single

The U1, U2, U4, U7 and U7 lines will offer more space on this day due to longer trains. However, due to track work between Nieder-Eschbach and Gonzenheim, the U2 only runs between Südbahnhof and Riedwiese/Mertonviertel, the U9 is cancelled.

Line 11 operates in the west of Frankfurt from 7am only between Höchst and Hauptbahnhof (south side). In the east, it will not begin service until 1 p.m. and will run between Fechenheim Schießhüttenstraße and Bornheim Burgstraße. From 5 p.m., it will run from Fechenheim via Konstablerwache to Lokalbahnhof. The replacement service between Börneplatz/Stoltzestraße and Daimlerstraße will not run on this day.

From 7am, line 12 will only run between Rheinlandstraße and Willy-Brandt-Platz and - due to the existing detour - between Zoo and Ernst-May-Platz.

Line 14 runs from 7am only between Mönchhofstraße and Heilbronner Straße.

The line can run from about 6.30 to 10.30 not reach Südbahnhof and is diverted from Haardtwaldplatz to Hauptbahnhof (south side).

The 17 is from about 6.30 to 10.30 only between Rebstockbad and Hauptbahnhof (south side) in operation.

The Ebbelwei-Express of the VGF does not run.

The line operates from about 8 am to 5 pm only between Tempelhof and Riedwiese/Mertonviertel.

The line operates from about 8.15 to 17 o'clock only between northwest center and the underground station Nieder-Eschbach.

From about 7.45 to 17.30 o'clock the lines 30 and M43 run as a common ring line from Bornheim Mitte via Friedberger Warte and Heiligenstock/Lohrberg to Bergen and from there on the way of the line 43 via Seckbach back to Bornheim Mitte.

Between Heiligenstock and Bad Vilbel the line 30 can not run.

From Bornheim Mitte in the direction of Seckbach and Enkheim, you can get to Bornheim from about 6:30 a.m. to 2 p.m. with another Ringlinie 43, which returns to Bornheim via Vilbeler Landstraße, Borsigallee and Riederwald.

From about 8.45 to 17.15 the line M32 runs only between Ostbahnhof/Sonnemannstraße and Günthersburgallee.

The line cannot be operated from about 7.30 to 17.45 not to Bornheim, but runs only between Mönchhofstraße and Homburger Landstraße/Marbachweg.

From about 7 to 17.30 the line runs only between Westbahnhof and Eschenheimer Tor and between Südbahnhof and Hainer Weg.

The line cannot reach either the Enkheim subway station or the Bergen district from about 7 am to 2 pm. It operates on a circular route between Leuchte and Riedbad in Enkheim.

Operation on this line is only from Leonhardsgasse to Birsteiner Straße, just before the Mainkur, until about 2 pm.

From about 5.30 to 10.45 hrs, buses will be diverted from the airport via the A5 motorway and from the Niederrad exit on the southern bank of the Main, via Lyoner Straße and Goldsteinstraße to the temporary final stop at Oberforsthaus. Back it runs from Triftstraße on the normal route to the airport.

Line 65 will not start its operation until 5 pm.

This express bus line will only operate between Airport Building 543 and Gateway Gardens Mitte from approximately 5am to 11am.

The line starts the first trip only at 17.49 from Friedberger Warte to Lohrberg.

Further info is available at: https://www.ironman.com/im-frankfurt