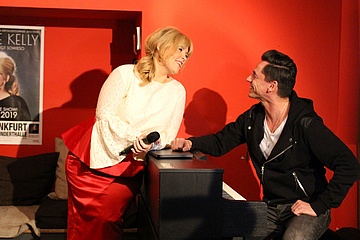 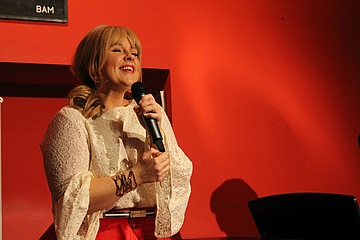 Before Maite Kelly will perform in March in the legendary Kuppelsaal of the Jahrhunderthalle, where legends from pop and rock have already been on stage, she gave a small foretaste of what fans can expect on the "biggest and most glamorous tour" of her career a few days ago in a much more intimate setting. At the Bristol Bar, where creative drinks are usually served, a different form of creativity took centre stage that day at a press brunch organised by concert promoters <link https: www.semmel.de _blank>SEMMEL CONCERTS. But before Maite Kelly joined her musical director Christoph Papendieck at the piano to showcase her musical prowess with an acoustic version of the song "Tonight Forever" from her latest album<link https: www.amazon.de gp product _blank> "Love wins anyway" was allowed to prove, the sympathetic singer surprised first as a cordial hostess, who organized the frostbitten press representatives first warm coffee.

Quickly it became clear in the relaxed bar atmosphere what the fans love so much about Maite Kelly. She seems extremely grounded and approachable despite the great successes she already celebrated in her childhood as part of the Kelly Family and quickly takes over the whole room with a mixture of naturalness and humour. It doesn't matter if it's a small bar full of press or a big hall full of fans. Therefore, already after the small musical sample, it can be assumed that the new tour will be a very special experience for fans. For Frankfurt fans anyway, as they unfortunately came away empty-handed from Maite Kelly's first, extremely successful solo tour.

But now the time has come: With her second album in her luggage, for which she has again written the songs herself, Maite Kelly will come to Frankfurt's Jahrhunderthalle on 17 March. She is very happy to be able to perform in Frankfurt, she tells before her musical tasting. Because she has particularly positive memories of our beautiful city, especially from the time when the Kellys were still on the road as street musicians. "In Frankfurt, the hat was always full," she reveals to us. Guaranteed, the Frankfurt fans in the Jahrhunderthalle will also be particularly generous with applause when Maite Kelly will perform songs like "Wenn ich liebe", "Liebe lohnt sich" or "Held".

Whether disco fox or soulful ballad, Maite Kelly has managed to sing her way into the top league of the Schlager scene in a very short time. Last but not least, the chart hit "Warum hast Du nicht nein gesagt", a duet with Schlager veteran Roland Kaiser, has contributed to this success. It will be interesting to see where Maite Kelly's journey will take her. But one thing is quite clear: If the mood at the concert in the Jahrhunderthalle is as good as it was at her small press guest performance in the Bristol Bar, then fans can look forward to a charming, powerful and rousing Schlager fireworks.