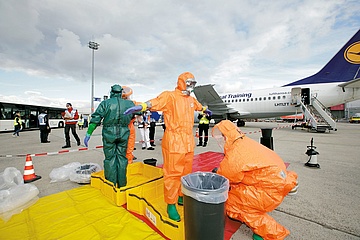 (ffm) According to the guidelines of the international civil aviation authority ICAO (International Civil Aviation Organization), EASA- (European Aviation Safety Agency) and IGV (International Health Regulations), international airports such as Frankfurt Airport must regularly conduct emergency exercises to optimally prepare emergency forces for emergencies. Such an exercise was on the agenda at Fraport AG on Thursday, November 8. Since the situation involved an infectious hazard, the Frankfurt Health Department was involved in the exercise.

The core of the exercise scenario was the appearance of symptoms of Crimean-Congo fever in a passenger on board an aircraft en route from South Africa to Frankfurt. In addition, a second passenger showed similar symptoms. As Crimean-Congo fever is a dangerous infectious disease, the Competence Centre for Highly Pathogenic Infectious Agents of the Frankfurt Health Department was alerted.

After the fictitious landing, the doctors of the Competence Center as well as the medical staff of Fraport AG took care of the passengers in the aircraft. The exercise included dividing the passengers into the categories "patients", "suspected contacts" and "other passengers", transporting the infectious patients with special vehicles from the Frankfurt Fire Department and Johanniter Unfallhilfe Kreis Offenbach to the special isolation ward at Frankfurt University Hospital, informing and examining the contacts in a medical assessment center and also informing the other passengers.

The head of the health department of the city of Frankfurt, Councillor Stefan Majer, took a look at the operation at the airport. His conclusion: "The exercise was a complete success, because all the necessary measures were well and quickly initiated by the many people involved. I was particularly pleased to see how smoothly the cooperation between the airport's emergency services, the emergency services of our health department's competence centre, the emergency services, the police and the many other emergency services and participants worked. Of course, I hope that such an emergency will not occur. Nevertheless, it is good to know that we are well prepared if it should happen. My thanks to all those involved in the exercise!"