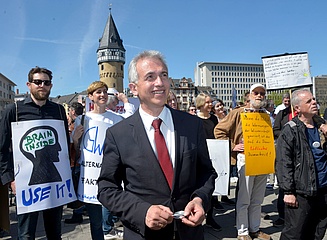 In Germany, such a protest seems at first glance not really necessary yet, science enjoys a high status in our country, while in other countries researchers are politically suppressed and persecuted. But in this country, too, there is reason to be vigilant in order to be able to counteract undesirable developments in good time. The example of the USA shows how quickly things can change radically. That this can also happen in Germany is not a far-fetched idea. The unword of the year, "alternative facts", marks an already worrying development in the wrong direction.

And that is why the March of Science was also called for in Frankfurt. "It is wonderful that we are here again today after the premiere of the March of Science last year," said Lord Mayor Peter Feldmann, who welcomed the rally participants. "Science is not an end in itself; science and society need and depend on each other. We have to strengthen this self-image, especially in the common fight against demagogues, rat-catchers and spreaders of fake news."

The organizers of the March for Science pointed out that science in Germany and Europe is facing an increasing loss of confidence. In order to counter this crisis of confidence, they said, the value of scientific thinking must once again be brought to the forefront of society's consciousness. At the same time, it is also the responsibility of science itself to acquire and maintain the trust of society. The current scientific system, for example, offers no incentives for scientists to communicate their research to the outside world. However, trust only comes through communication.

"We all know what can happen when science is not free, when political constraints and forces act on it. We have historical responsibility, we have to set strong signals," said Peter Feldmann. "It is all the more important that science and society and politics are one here and now: Only together can we build pressure, fight for democratic and liberal standards from which we must not deviate." The city of Frankfurt, he said, has always been known for its pursuit of freedom and equality.

You can also learn more about the March of Science HERE