Mario Adorf comes to the Deutsches Filmmuseum
from FFM Aktuell 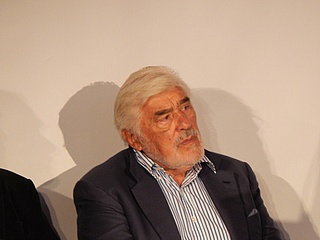 High-ranking visitors have announced themselves at the DFF: Mario Adorf will pay a visit to the Filmmuseum on 8 March. The reason for this is not only that there will be two screenings of the documentary film ES HÄTTE SCHLIMMER KOMMEN KÖNNEN - MARIO ADORF with a foyer talk on that day. Urs Spörri (DFF) will talk to Mario Adorf about his life and work in the foyer of the DFF. In addition, the foyer exhibition "Close-up: Mario Adorf" will also be dedicated to the great mime from January 22 to April 26.

The exhibition celebrates the multifaceted work of a great artist. Crook and mafioso, father and patriarch, psychopath, arbitrary victim and policeman: Mario Adorf has shone as an actor with a wide range since 1954 at home and abroad. His incomparable mimic expressiveness and his sonorous voice make his acting performances, his dubbing texts and his chansons unmistakable and make him a German world star. On the occasion of his 90th birthday this year (Mario Adorf was born on September 8, 1930), "Close-up" uses numerous objects from the DFF archives to show Mario Adorf's miming skills in close-up. A tribute to one of the greats.

Info at a glance:

Film screening IT COULD HAVE COME WORSE

Tickets can be purchased in advance online and at the DFF box office. Reservations are not possible.

The documentary IT COULD HAVE COME WORSE - MARIO ADORF (DE 2019) follows the celebrated actor to significant places in his life's journey, from his childhood to his great stage and screen successes.