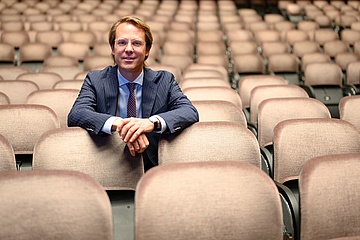 Great changes are imminent at the Alte Oper Frankfurt. At the suggestion of the Chairman of the Supervisory Board, Lord Mayor Peter Feldmann, and the Deputy Chairman of the Supervisory Board, Head of the Department of Culture Ina Hartwig, the Supervisory Board has decided that Markus Fein will head the Alte Oper Frankfurt as artistic director and managing director from 1 September 2020. He will succeed Stephan Pauly, who will leave the Alte Oper in the summer of 2020 after more than eight years and will begin as the new artistic director of the Gesellschaft der Musikfreunde in Vienna. Markus Fein is still managing director of the Festspiele Mecklenburg-Vorpommern, which he has been leading since 2013. With more than 90,000 visitors, almost 200 concerts a year and 30 employees, the festival is one of the largest classical music festivals in Germany, with more than 90,000 people attending. Nearly half a million visitors a year speak for themselves - they go to major entertainment shows as well as to performances that belong to the avant-garde of classical music. I am very happy that Markus Fein, an artistic director with experience in many fields, is coming to the Alte Oper. His tasks will also include developing new target groups and binding younger and middle generations to the house more strongly than before", Lord Mayor Feldmann welcomes the future artistic director in Frankfurt.

"I am convinced that Markus Fein is a great asset for the Alte Oper and for Frankfurt. In addition to his musicological education, he has many years of experience as an artistic director and cultural manager. Markus Fein has an excellent reputation in the industry, is regarded as someone who is close to the audience and constantly develops new, original formats. His work is characterized by the idea of networking and participation - both fit wonderfully to the Old Opera House and this city. I am looking forward to the cooperation and the innovative impulses which we will experience through Markus Fein and which will further expand the position of the Alte Oper Frankfurt in international musical life", says Head of Cultural Affairs Hartwig.

Markus Fein was born 48 years ago in Frankfurt, and this appointment closes a circle for him: "The Alte Oper is a fantastic house of possibilities. I want to pick up where Stephan Pauly left off and continue on the path of profiling content and opening up the house to new audiences. The Alte Oper is a great gift of the city of Frankfurt to the world of music."

Fine studied applied cultural sciences, musicology and art history and completed his studies with a dissertation in musicology at the University of Hamburg. Afterwards he took over the artistic direction of the "Sommerliche Musiktage Hitzacker" for ten years, to which he was already connected from 1993 as coworker, dramaturge and organizational director

From 2006 he led the "Niedersächsischen Musiktage" as director for five years. From 2010 to 2012, he was initially artistic advisor and finally head of programme planning/dramaturgy with the Berliner Philharmoniker. During this time Fein worked with Sir Simon Rattle, among others, on new event formats.

His current work at the Festspiele in Mecklenburg-Vorpommern is characterized above all by a broad musical spectrum and the claim to make concerts accessible to a broad audience. Participation, a sharp profile in terms of content and a sensual-discursive approach shape his thinking as an artistic director. Especially for a young audience he conceived numerous new concert formats and dialogue forums. Since 2017 he has introduced more than 10,000 children to classical music every year with a special children's programme.