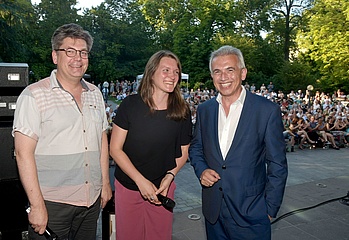 It's summer: the theaters are closed and the lights are still off in the concert halls. Culture usually takes place outside during these weeks - as it does at the popular series "Summer in the City", which the Palmengarten and the Mousonturm have been jointly staging every summer for over twenty years now. World music, ranging from folk, jazz, electro or avant-garde, is the focus of the concerts at the open-air event. The 2019 edition has now been opened by Lord Mayor Peter Feldmann together with Matthias Pees, artistic director of the Mousonturm.

This time, Daniel Kahn & The Painted Bird, the international Klezmer band around Daniel Kahn, who comes from Detroit, kicked things off. Those who missed this great concert need not fret: five more concerts with artists from France, Great Britain and Germany will follow.

"I am very pleased to welcome you here at one of the most beautiful places in our city," said Mayor Peter Feldmann in his welcoming speech. "The Palmengarten knew how to use the magic of music from the very beginning: Concerts have been a fixed institution since the garden's existence, and people also come from the region to experience the special atmosphere." Alongside "Summer in the City" is the world's oldest continuously running open-air jazz festival: "Jazz im Palmengarten" celebrates its 60th anniversary this year. The Chamber Opera has been a guest at the Music Pavilion for 25 years - this year with a rarely performed Rossini opera. And until September, all visitors can listen to the Promenade Concerts every Sunday afternoon, at no additional cost.

"Music is for everyone - for children and adults, for young and old, for locals and newcomers. Music is understanding, even if you don't speak the same language. Sometimes it hits you right in the heart. And for all that music can do, it can also be simply beautiful," Feldmann concluded.

Beautiful music in a beautiful location = a beautiful way to enjoy a balmy summer evening. Great to have that again in 2019 with SUMMER IN THE CITY and the other music offerings at Palmengarten.

The complete music program at the palmengarten is available HERE