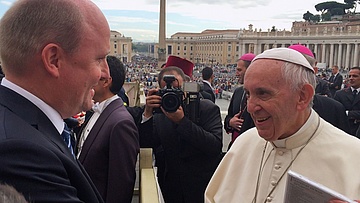 (kus) Mayor and Head of the Church Uwe Becker has returned from his trip to Rome, where he conveyed the greetings of the City of Frankfurt am Main to the Holy Father during his participation in the general audience of Pope Francis. In a personal conversation with the head of the Catholic Church, Mayor Becker explained that Pope Francis, with his great closeness to people, is also a special role model of practiced compassion for many Frankfurt residents.

"Pope Francis lives and practices compassion towards others, regardless of their background, and he is thus a bearer of hope for many who themselves want more charity in the world. I have conveyed to him that many people in Frankfurt also see it that way and will support him on this path," Mayor Becker explained.

In the mission to the Church formulated by Pope Francis, Mayor Becker sees a fundamental mission to our entire society. And despite all the different roles of state and church, for him as a representative of the city of Frankfurt, it is precisely this understanding of a common responsibility for a just coexistence of people that is a unifying element. As the financial capital of Europe, Frankfurt am Main is often seen only as a busy economic centre. "However, around 170 nations live together peacefully here, making Frankfurt the most international city in Germany. To shape a just and peaceful coexistence, Frankfurt makes considerable efforts and is successful in doing so," Becker emphasized.

"However, the city's partnership with the Christian churches in particular is of a very special quality in the supposedly so <x>ampersand</x>sbquo;secular' city of Frankfurt and takes place successfully not only in the geographical heart of the city, but actually in the middle of our society. It is precisely this togetherness, this partnership based on shared values, that I would like to continue to develop in the future for the benefit of the people of Frankfurt and the entire FrankfurtRhineMain region. Pope Francis' call for a more just society can certainly be a compass for action beyond the Catholic Church," Becker continued.

"The Holy Father was very pleased with the greetings from Frankfurt, as he spent some time here - albeit only briefly - on the occasion of a study visit to St. George's in the mid-1980s. Therefore he also gave me the warmest blessings for all the people of Frankfurt quasi in my luggage. It was a very moving meeting with an extremely open and charismatic person. You can feel and experience his likeable down-to-earthness and warmth," Mayor Becker explained.

As a gift, Mayor Becker presented the Holy Father with a CD containing recordings of the Great Frankfurt City Ringing, the unique composition of the bells of Frankfurt's inner-city churches, and invited Pope Francis to visit the Main metropolis.