Maze at the Goetheturm walkable again
from FFM Aktuell 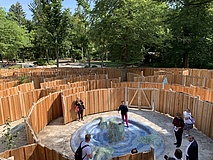 Good news for all children who visit the Waldspielpark am Goetheturm: After a long break, the popular maze is open again. It had been closed for over two years because the wooden wall construction was no longer stable. A good occasion to renew the maze, which was opened in 2006, once all around. Financial support was provided by the RhineMain Regional Park, the GreenBelt Project Group and the Landwirtschaftliche Rentenbank. On Thursday, 28 July, the maze was reopened now by climate and environmental head Rosemarie holy, Claudia hunter, the supervisory board chairmen of the regional park agglomeration Rhine Main, Dirk cutter, the deputy director of the project group green belt, and presented to the press.

"With the maze at the Goetheturm, one of our most beautiful forest playgrounds becomes complete again," said Climate and Environment Director Rosemarie Heilig. "In the past Corona years, we have experienced how important our playgrounds are for Frankfurt's children and for families as a whole. They will continue to be an important part of our public service in the future. Where, if not there, can city children run, play, hide or climb without fear? The maze with its GrünGürtel animal is also a unique attraction in Frankfurt's GrünGürtel."

Also Claudia Jäger, the chairwoman of the supervisory board of the Regionalpark Ballungsraum RheinMain, expects the new maze to be another point of attraction for excursions on foot or by bike to Frankfurt's GrünGürtel: "Frankfurt's GrünGürtel is the 'heart of the Regionalpark'. Goetheturm and also Waldspielplatz are already real flagships. Our goal is to steadily expand the recreational offerings for the region's families. This has succeeded very well with the basic renewal of the maze as another experience point."

"We look back on 30 years of GreenBelt," said Dirk Schneider, deputy head of the GreenBelt project group. "The versatility of the landscape and attractions in the GrünGürtel have been very popular with Frankfurt residents for decades now. More major planning challenges await us in the future. In times of climate change, we must respond to changes, for example, with sufficient shaded rest areas along the hiking trails. As a project group, we are very pleased that the maze can once again be used by young and old at the foot of the Goetheturm."

Inside the maze, a 500-meter path winds its way, tracing the shape of the GrünGürtel logo. FSC-certified, robust Robinia and Douglas fir wood was used for the 1.80-meter-high wooden plank walls during the renovation. Care was taken to ensure that individual pieces of wood could be easily replaced if necessary. To ensure that the center of the maze is easily accessible, for example for maintenance and care, gates were built into the wooden walls. They also serve as escape routes.

On the search for the center of the maze, children can experience some surprises: Sometimes a mirror distorts their own image or their boyfriend or girlfriend simply disappears through the wall. A wooden play tower with red rope netting provides an overview. Along the way, parts of the GrünGürtel animal, the "heraldic animal" of Frankfurt's GrünGürtel, appear again and again: here a foot, there a shoulder or an ear, then a little wing waves and in the middle it lets water spray out of its nose. The GrünGürtel animal elements are cast from concrete and covered with a mosaic of fine colored stones.

The tree seedlings that have grown over time within the maze, mostly beech trees, were protected during the renovation so that they can continue to grow. In addition, three more new sessile oak species trees will be planted in the fall.