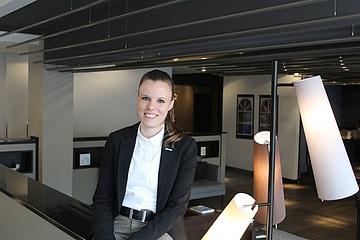 Changes in the beautiful hotel in Frankfurt's station district: the Le M&eacute;ridien Frankfurt is pleased, draws the Swiss-born Melanie Simone Seiler (28) in the management of Munich Hotel Partners (MHP) led house as Front Office Manager responsible. The trained hotel manageress as well as graduate H&ocirc;teli&egrave;re and restauratrice comes from London's Bexleyheath Marriott Hotel, where she was under contract in the same function.

The Le M&eacute;ridien Frankfurt, with 300 rooms and suites, is located in Frankfurt's Bahnhofsviertel, on a leafy city square that is considered a hotspot for the gastro and nightlife scene. The hotel is just a few minutes' walk from the main railway station and the banking and business district, the Museumsufer is within easy walking distance and the airport within 15 minutes by car. "History versus modernity" is the motto of the hotel, which consists of a modern part and a historic palace in neo-Renaissance style. In-location for casual fine dining with smoked and barbecue specialties is The Legacy Bar & Grill. The Giulia Super bar is also located in the same building. For meetings and events, the hotel offers ten function rooms in more than 600 square feet of space. The Le M&eacute;ridien Frankfurt realizes the group-wide art program "Unlock art" through a partnership with the Schirn Kunsthalle, one of Germany's top addresses for contemporary art. Le M&eacute;ridien Frankfurt is under the management of Munich Hotel Partners GmbH (MHP).