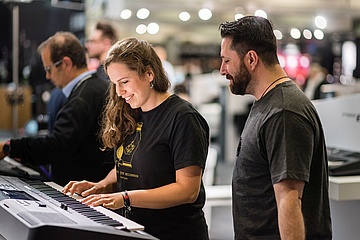 Exhibitors, trade visitors and all music enthusiasts have already had to do without the Musikmesse twice. But in 2022 it is finally to go on. The date for the next Musikmesse has now been announced: This is to take place from 29 April to 1 May 2022. A new feature is the public-oriented sequence of days (Friday to Sunday), with which Messe Frankfurt is underlining the path it has already taken in previous years. In this way, the event would like to open itself up even more than before to people interested in music and to musicians of all professional levels. In terms of content, Musikmesse 2022 will also focus on new themes that go far beyond the presentation of musical instruments and accessories. In this context, the Musikmesse Festival (28 April to 1 May) and the Musikmesse Plaza (30 April to 1 May) will also enter a new round.

"As hard as the crisis in the music and event industry has been and is being felt, we are going full steam ahead to lead Musikmesse into a successful future," says Wolfgang Weyand, Director Musikmesse and Festival. "Against the background of the upheaval in the instrument trade and the continuing tense market situation overall, there is no question that this will require adjustments to the trade fair concept in the future. We are focusing on music and the social significance of music-making - now more than ever! At the same time, we are open to new impulses and invite all market participants to approach us with their wishes and ideas. Together we would like to celebrate a festival of music, as the industry deserves after many months of lean times."

But for all the innovations, one thing will remain the same: In 2022, the Musikmesse will continue to give companies of all shapes and sizes the opportunity to showcase their products - from key players to small manufactures. It continues to appeal to international professionals from the trade and distribution sectors and is also open to anyone interested in music who wants to find out about what's new on the market.

One of the main focuses for 2022 is on expanding the product portfolio: In addition to musical instruments and sheet music, the show will also give a platform to emerging market segments such as musical apps, smart and virtual instruments, AI-powered music production, and digital label <x>ampersand</x> artist solutions. As a supporting pillar of the event, the area of music education will also be expanded.

In addition, top-class congress content is planned for industry players in the cultural and creative industries. Messe Frankfurt would like to address not only musicians and authors, but also content developers, publishing experts, business developers, multipliers and influencers, thus giving the Musikmesse the character of a creative hotspot.

Musikmesse Plaza bundles content for an experience-oriented target group ranging from ambitious musicians, collectors and instrument lovers to fans, newcomers and families. It opens as a complement to the Musikmesse on Saturday and Sunday.

Exhibitors at the Musikmesse Plaza have the opportunity to reach end customers in a targeted way and sell their products directly. The spectrum includes instruments to try out, sound carriers, merchandise, lifestyle articles and much more.

An attractive entertainment programme with workshops, meet and greets, interactive music events and concerts makes the Musikmesse Plaza a magnet for everyone who loves and lives music.

It wasn't just the trade fair that we had to do without in 2020 and 2021. Events in general were also not possible for many months. Here, too, the trade fair is hoping for improvement and would like to make up for the "small anniversary" with the 5th edition of the Musikmesse Festival.

For this purpose, cooperation with organisers, venues and other partners is again planned in order to make the whole of Frankfurt resound for four days. The festival is also an attractive option for exhibiting companies at the Musikmesse to present their brands to the general public in an event-oriented context.

Further details on the concept of the four-day overall musical experience will follow shortly.

Up-to-date information on the Musikmesse can also be found at www.musikmesse.com