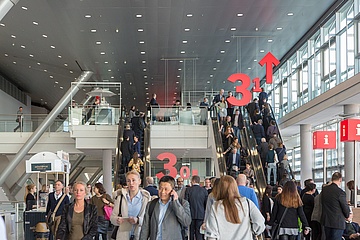 The Messe Frankfurt Group looks back on a successful first half of 2018. At the company's press conference, Wolfgang Marzin, Chairman of the Board of Management of Messe Frankfurt, was pleased to announce, "We are aiming for sales in the direction of 700 million euros." After a very dynamic first half of the financial year, the forecasts for the second half of the year are also good.

Since 2010, Messe Frankfurt's group sales have risen by around 50 percent from €448 million to around €669 million in 2017. Net profit for the year is around 41 million euros, the second-best figure in the company's history. "With the three business segments Fairs & Events, Locations and Services, we have a proven business model and a firm foundation for our further developments," said Marzin, summing up the company's successful growth. Messe Frankfurt's global network has been condensed to 30 subsidiaries with a new location in the UK and another in China. The company is systematically driving its new business forward with a current total of 25 premieres. "The synergies we achieve within our global companies are strengths that we use sustainably and profitably," Marzin said.

"If everything goes according to plan, we will be able to increase our exhibitor record of 95,000 companies once again in the 2017 financial year," emphasised Detlef Braun, Member of the Board of Management of Messe Frankfurt. The company is expanding its industry expertise in key growth regions in the Fairs & Events business segment. "Our events are growing in depth and breadth and with high levels of internationality and satisfaction among our customers," said Braun, summing up the company's global operating business. In an industry and market environment that is not always easy, Messe Frankfurt supports its customers and successfully invests in further and new developments. "The linking of different perspectives and industries creates room for new projects, business models, cooperations and target groups for us as a marketing partner for our customers and as an organiser," Braun emphasised.

Around 240 events a year at the Frankfurt exhibition centre

After two years of construction, the major project Hall 12 will go online in September with Automechanika and will further enhance the overall trade fair service at the Frankfurt venue. "A top-quality exhibition centre - and the Frankfurt exhibition centre is one of the best in the world - creates optimum conditions for successful events for us and all other organisers. Thanks to these investments, we can further develop the concept of our own events and offer guest events new opportunities", Behm emphasised.

Messe Frankfurt hosts around 240 events every year. The booking situation in the Locations business segment is very pleasing. In cooperation with municipal institutions, the company has set itself the goal of positioning Frankfurt even more strongly worldwide as an international congress venue. For example, EULAR 2020, the Annual European Congress of Rheumatology, one of the six major medical congresses in Europe, will be held in Frankfurt. Around 15,000 participants are expected. The multifunctional historic Festhalle was named "Hall of the Year in the Germany, Austria, Switzerland region" at the Live Entertainment Awards 2018. Messe Frankfurt intends to further develop the Services business segment with analogue and digital offerings. "Tailor-made solutions across our range of services are added values that our customers greatly appreciate," says Behm.

Stable growth with first-class events worldwide is Messe Frankfurt's strength. The company's success is based not least on a continuous exchange with its customers. "We learn about our customers' needs and work together to develop new ideas and innovations for optimum trade fair support, both real and digital," emphasised Marzin.