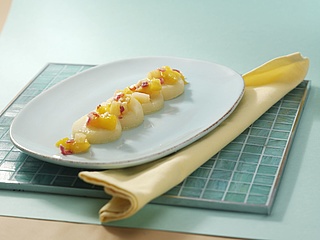 Mirko Reeh is fulfilling a heart's desire in October: on three dates he is hosting the 1st Handkäs Festival. And everyone who loves handkäs can take part: Whether restaurant chefs and bakers, food bloggers, housewives and Handkäs' maniacs from Frankfurt or from all over the world, anyone who wants to take part can submit their very own Handkäs' recipe to Hessen chef and Handkäs' ambassador Mirko Reeh. The recipes must be submitted by 20 September. After that, the winning recipes that are likely to be a hit will be carefully selected. And then it really gets going.

Those whose recipes are among the best will be invited to one of two final eliminations at Mirko's cooking school in Frankfurt-Bornheim. There, three favourites each will present their culinary creations live in front of around 40 guests. The grand finale and award ceremony will then take place on 23 October. The two preceding decisions are scheduled for 1 and 16 October. Tickets for all three events - of course with a culinary supporting program - are available for 79 <x>ampersand</x>euro; at <link https: www.mirko-reeh.com kochkurse _blank>www.mirko-reeh.com, there under "Kochkurse".

The moderation of the culinary events will take over travesty star Olga Orange. This ensures that not only the chewing muscles but also the laughing muscles will be put to use.

In the context of the Handkäs' Festival, the most creative recipes around the Handkäs' will be compiled and published in a small, approximately 60-page Handkäs' Brevier after the festival ends. The booklet in postcard size shows the festival winner on the cover and can be purchased afterwards - everywhere where books are available. The winner can look forward to 100 free copies and ascends to the Frankfurt Handkäs' Olympus.

Mirko Reeh, who has been dreaming of hosting a Handkäs' festival for quite some time, is now floating in seventh Handkäs' heaven: "There are so many wonderful products here in Hesse. But I have fallen in love with Handkäs'. And like him, many people seem to feel the same way, because his book series "Handkäse Deluxe" is a real hit - not only in the Handkäs' Land Hessen, where the cheese speciality is still lovingly formed by hand in small businesses.

Recipes you can now submit by e-mail at <link>kochwelt@mirko-reeh.com or by mail at Kochschule Mirko Reeh, Wiesenstraße 33, 60385 Frankfurt am Main. Deadline is September 20