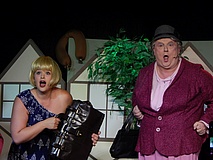 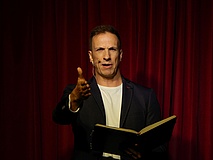 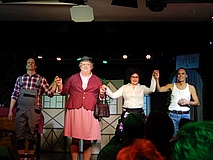 For Thomas "Bäppi" Bäppler-Wolf a dream has come true: He finally gets to impersonate the cult figure Miss Marple. Well, not quite. But Miss Moppel is at least as curious and shrewd as her British cousin. And she needs to be, because a serial killer is on the loose in Frankfurt. It begins with the murder of prostitute Svetlana Farakovski, who is strangled with a pair of ladies' tights on her way home at the Oberrad Waldfriedhof bus stop. When she is found, a bunch of pimpinelle lies between her legs. Soon there is another corpse and again herbs of the Green Sauce are found with her. All traces lead to the "Flotte Fichte" in Oberrad, where Miss Moppel immediately takes up residence to solve the case before the murderer can complete his work. But the road to the solution is difficult and paved with corpses.

It all started with an April Fool's joke when Bäppi posted on Facebook a few years ago on April 1: Bäppi is Miss Moppel in "16:50 to Offenbach" - coming soon to the Theatrallalla! As a result, the phone in the small theatre in the Nordend could not stand still - everyone wanted tickets for a play that didn't even exist. But then Timo Becker, who as Malte Anders with the play "Gay for a Day" does educational work in a very original, entertaining and awakening way, including in schools, took on the story. His crime parody - very loosely based on Agatha Christie - is an entertaining mix of delightfully overdrawn crime clichés, running gags and charming nods to the wonderful Miss Marple - all spiced up with plenty of local Frankfurt colour.

Next to Bäppi as Miss Moppel, Eva Völl, Thomas Koob and hr3 presenter Mathias Münch are also on stage in several roles, which also makes for some amusing moments. The premiere audience was thrilled by "Miss Moppel - 16:50 to Offenbach". In addition to many hearty laughs, there was thunderous applause at the end, not only for the actors, but also for Timo Becker. In addition to numerous side blows to our neighbor Offenbach and some really biting sayings, the crime parody works especially well, because you notice that the actors have a lot of fun in the turbulent murder hunt - and this fun transfers just quickly to the audience.

Thomas "Bäppi" Bäppler-Wolf has found another parade role with Miss Moppel, from which one would like to see more in the future. So let's hope that the investigations in Oberrad will not remain the only mission for Frankfurt's new master detective.

"Miss Moppel - 16:50 to Offenbach" can be seen at the Theatrallalla until September 21. More info on showtimes and tickets can be found HERE