Model trial in Nordend: A garage just for bikes
from FFM Aktuell 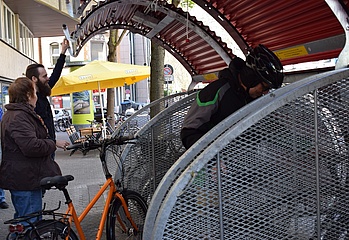 Photo. City of Frankfurt am Main

Riding a bike in the city is commendable in itself, but not always a pleasure. Hooligans on two or four wheels, wild parkers on bike paths or pedestrians who seem to be mentally connected only to their smartphones and do not even listen to bicycle bells anymore, make cycling a real challenge especially for those people who follow the traffic rules. And then there's the question of where to lock the bike. Particularly in densely built-up areas of the city, it can be a problem to find a safe and legal place to park your bike close to your home. The city of Frankfurt am Main is now taking a new approach to this problem by setting up bike garages in central locations in a pilot project in the Nordend district. Head of Transport Klaus Oesterling opened the first three garages in Hegelstraße on Thursday, April 11, and handed over the keys to the future users.

"Only those who have a protected and secure place to park their bike near their home regularly use their bike for everyday journeys. The FahrRadGaragen are therefore a further offer to promote cycling in the city and to make everyday life easier," said Transport Director Oesterling.

The Department of Road Construction and Development has installed the FahrRadGaragen in Hegelstraße. However, the garages are operated and maintained by the users themselves. They have formed a civil-law partnership (GbR) and concluded a transfer agreement with the city. Financially, each user (a maximum of twelve) makes a one-time contribution of 380 euros to the acquisition costs. Any maintenance costs incurred are borne by the user association. In addition, the following applies: no profit may be made with the FahrRadGarages.

The FahrRadGarages are a pilot project. The Mobility and Transportation Planning Department, as part of the Transportation Department, is evaluating the model trial. The aim is to determine whether the concept could also be considered for other locations in Frankfurt. The garages in Hegelstraße cost around 23,000 euros, including installation.

"The garages are a further building block in promoting cycling as a healthy and environmentally friendly way of getting around. In addition, the city is expanding the network of cycle paths, providing bicycle parking facilities at central intersections and improving the infrastructure overall," added Michaela Kraft, head of the Office of Road Construction and Development.

Safe and weather-protected parking facilities for bicycles are an issue in other cities across Europe, which offer solutions for their citizens to this end. The city of Hamburg, for example, promotes the construction of bicycle shelters, some of which are located in public areas and are maintained by the users themselves. In the Hanseatic city, there are around 400 bike sheds.

Also in the Netherlands, many cities are setting up so-called Fietshangars. In Rotterdam alone there are about 600 Fietshangars. This is the same model that was chosen for the pilot project here in Frankfurt. In Greater London, there are currently about 1500 bike garages called Bikehangar available for citizens.