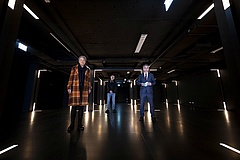 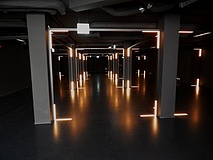 Actually, it should have been opened long ago. But not only that the financing caused problems. After this was clarified, the pandemic came - a large opening celebration was there of course not to think. So the doors still have to remain closed. But now the opening of the museum is getting closer and closer. If the pandemic allows it, the first exhibition will be on display in early autumn. Today we were allowed to take a first look at the newly designed rooms. Admittedly, there is not much to see yet. But what museum initiator Alex Azary, chairman of the Friends of MOMEM, presented to us at least gives an idea of what visitors can expect here in a few months. One thing can be said quite clearly: club atmosphere has been captured very well here by the combination of architecture and lighting design.

When the doors of the former children's museum at the Hauptwache open, the view is revealed to an entrance counter consisting of subwoofers. Otherwise, black walls, frosted glass panes with the MOMEM logo in fine letters and a roomy hall with a special lighting concept dominate the museum, which could even now house the first art objects and exclusive exhibits. Mayor Peter Feldmann, who took part in the first tour of the museum together with the head of the department of culture, Ina Hartwig, is very hopeful that the opening can be celebrated in the autumn. He is convinced that "the MOMEM will attract attention worldwide. An opening without a big celebration is unthinkable. And Azary promises a very unusual special exhibition for the launch.

The fact that the interior work is so far finished pleases not only Azary and the rest of the MOMEM team, but also the head of the city: "It's great that MOMEM is ready - now, unfortunately, the pandemic continues to put us on tenterhooks, because the Museum Of Modern Electronic Music needs a decent opening, due to the winding building without the current restrictions and distance bids," Feldmann said. And head of culture Ina Hartwig adds: "MOMEM is at the heart of the city - just as the history of electronic music is closely linked to Frankfurt and is part of the cultural identity of this city. Today, the museum's organizers have shown us the innovative concepts and communicative ideas with which they intend to give MOMEM international appeal. I am convinced by the concept, which highlights cultural connections and enriches not only the diversity of the local museum landscape for a young, international audience, but also the Hauptwache as a place of experimentation and a meeting place for people interested in music."

Alex Azary can hardly wait for the opening either: "Despite the difficulties of the past year, we have largely completed the transformation of the MOMEM spaces. With our design concept, developed and implemented by Atelier Markgraph, we have created the appropriate context to adequately showcase the many different aspects of club culture." He also hopes that not only MOMEM itself, but also the square in front of it will become a popular meeting place in the city centre. The square is not really attractive at the moment. But there are already many great, innovative ideas to upgrade the square after the pandemic and to "bring culture to the city", says Azary.

We will of course stay on the topic! When there will be a concrete opening date and more info about the first special exhibition at MOMEM, you will of course find out here with us!