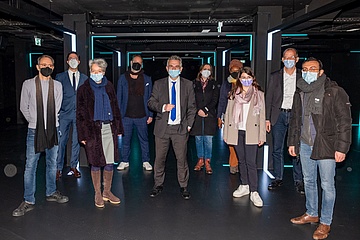 On many occasions we have reported here about the planned, worldwide unique MOMEM, the Museum of Modern Electronic Music. But time and again, something got in the way of its completion and opening. Most recently, the Corona pandemic ensured that the internationally eagerly awaited museum at Frankfurt's Hauptwache had to postpone its opening time and again. But there is good news: The Momem is ready and can finally welcome its first audience in April 2022. On Friday, there was already a first opportunity to visit the premises, which, among others, the city councilors Mike Josef, Eileen O'Sullivan, Bastian Bergerhoff, Ina Hartwig and Lord Mayor Peter Feldmann took with great interest.

To the first tour, there was then also information about what visitors can expect in April. Because the Momem starts its operation right away with a spectacular exhibition about one of Frankfurt's most famous DJs and artists: Sven Väth. The musician is collaborating here with another Frankfurt native, Städel School professor Tobias Rehberger. The exhibition will also feature works by Andreas Gursky.

"The fact that Väth and Rehberger are two holders of our city's Goethe Plaque at work is a real bang for the buck for the launch of this new museum," said Mayor Feldmann. "I am delighted that the Friends of the Momem have believed in their idea for so long - hundreds of press articles from all over the world testify to the attention that is being paid not only to the museum, but to electronic music as a whole. For Frankfurt, the house is an asset - and for Frankfurt's city center and especially the Hauptwache, it's a great leap forward," the city leader added.

The museum with club atmosphere will clearly enrich Frankfurt's cultural scene. Ina Hartwig, the city's head of culture, is also convinced of this: "There is no other place like the Momem in the world. It's not surprising that it's located in Frankfurt - one of the birthplaces and pioneers of the worldwide triumph of electronic music." The opening exhibition is exemplary of this, he said: "Sven Väth's artistic path began in the Dorian Gray club at Frankfurt Airport, first as a dancer, then a DJ - from this he made an extraordinary career," said Hartwig. That he now relies on the two exceptional artists Tobias Rehberger and Andreas Gursky for his first solo exhibition is great, he said.

One person who should be particularly happy that the Momem will finally be a reality in a few months and can be visited by interested people from all over the world is Momem maker Alex Azary, who has always held on to his dream against all odds: "We've been working on it for a long time, the first ideas were there almost ten years ago," he explained. Most recently, the worldwide pandemic had prevented the opening, and now the date had to be postponed again until next spring: "That's a shame, but everyone's health comes first," Azary said. "For that we start then with a real banger." Sven Väth, he said, has influenced an entire generation of DJs and music producers more than almost any other artist, including through the Omen, a club that made its mark on the scene in the 1990s just a stone's throw from the Hauptwache.

Artist Tobias Rehberger was also at the Reveal. He said, "We're talking about an exhibition about an artist that I would say is not museum-ready at all. Sven Väth has been DJing for 40 years - and that's exactly the story that hasn't ended yet, he's still on the road, he's still creative, he's still partying, and that's exactly what we're going to be doing here with him next April."

Over the past two years, museum makers had extensively remodeled the former Children's Museum in the Hauptwache. It is now dominated by dark tones, coloured lights reminiscent of neon tubes, and the reception desk is made from the material of loudspeaker boxes from clubs. In general, there is less of a museum feeling and more of a nightlife feeling. The interior and architecture perfectly reflect the theme of the Momem.

You can convince yourself of this on April 6, 2022 - because that's when the opening with Väth, Rehberger and Gursky is planned. It also fits in with the plans of the city of Frankfurt, which wants to revitalize and beautify the Hauptwache station and its surroundings (which is urgently needed). For this, the Momem is the first and hopefully not the last mosaic stone.

A title for the opening show has already been decided, according to Sven Väth. It couldn't be more fitting for these times: "It's simple to tell, what saved us from hell." We're excited...