Mood of optimism at the International Theatre
from FFM Aktuell 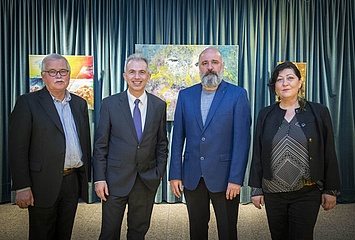 The signs point to change at the International Theatre. But fear not: what Jan H. Mayer and his team have painstakingly built up over the past few years will, of course, continue to make up the central offering of this very important theatre for Frankfurt's cultural landscape. But the new director, Müjdat Albak, will also be responsible for some changes and new focal points. To kick off the new season, Lord Mayor Peter Feldmann and Head of the Department of Culture Ina Hartwig attended the opening ceremony of the new International Theatre on Friday, 19 January. Through the merger of the supporting association with the association "Ora da!", which already operates the Günes Theater in Rebstöcker Straße, the stage in Hanauer Landstraße will continue to operate under the same name in the future.

"Young people with a migration background and families who live with us in the second and third generation bring stories, experiences and adventures with them that can be conveyed through the arts. Learning from this, getting to know each other and breaking down prejudices becomes possible through a place like the International Theatre," said Lord Mayor Peter Feldmann at the opening ceremony.

As already mentioned, the focal points of the International Theatre will remain. New, on the other hand, will be, for example, the "Tiyatro Türk", which will present, among other things, productions of the Günes Theatre and music events. In addition, the "Transcultural Stage" is to form a new focus, a kind of theatre laboratory that deals with the topics of migration and integration. "The new International Theatre emerges from what was and further develops what has been achieved and lived in the past decades," says head of culture Ina Hartwig.

Since its founding, the International Theatre Frankfurt has, with its cultural offerings, created a place for many people of different origins to experience art and culture from their home country and to enter into a dialogue with the unknown or foreign. "The International Theatre is home to different genres and art forms from all over the world. Lively and always in motion, it embraces discourse and offers space for debate - I wish the staff and artists a good new start, much success and the audience enriching experiences," the Head of Culture concluded.

You can find the program of the International Theatre HERE