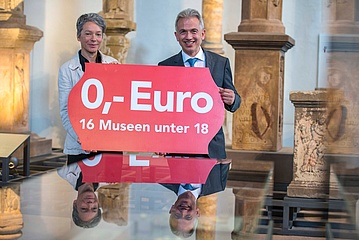 (kus) Lord Mayor Peter Feldmann and Head of the Department of Culture Ina Hartwig presented the new information campaign on Monday, 22. May, at the Archaeological Museum presented the visitor figures of children and young people under 18 years of the first quarter of 2017.

The 16 municipal houses have recorded an increase in visits among the under 18s of about 25 percent compared to the same period last year. While around 11,700 young visitors visited the museums between January and March 2016, there were around 14,500 children and young people in the same period this year.

"The increased visitor numbers show that there is great interest in taking an active part in the cultural life of our city. We have thus come a great deal closer to our goal of helping children and young people in our city to participate more culturally," says Feldmann. "The doors of our municipal museums are open to all children and young people. We see culture as a public task and as an effective antidote to social exclusion."

Head of Culture Hartwig continues: "I am very pleased that the first few months already show how well our offer has been received. The significant increase of 2,800 young additional visitors in the first quarter compared to the same period last year speaks for this. This gives us hope for a further positive development. We want cultural participation to become a matter of course for everyone. That doesn't mean that everyone has to go to the museum all the time, but everyone who wants to should be given the opportunity."

A further look at the visitor figures shows that individual visits in particular - i.e. children who have visited a museum either alone or accompanied by adults - have increased significantly. While around 4,280 children and young people were recorded in the first quarter of 2016, the comparative figures for the quarter of 2017 show an increase of 74 per cent. In absolute terms, this corresponds to an increase of around 3,200 guests under the age of 18. This means that the municipal homes recorded around 7,500 individual visits by children and young people in the first quarter of this year. Only group visits showed a slight decline. The reason for this is, among other things, that registration with associated discounts is no longer required for daycare centers and school classes due to the new regulations.

So that even more people can enjoy this offer, a large-scale information campaign under the slogan "MUSEUMSREIF!" starts today. Posters, advertisements and postcards are intended to meet young and old alike in their everyday lives, for example at bus stops, doctors' surgeries, swimming pools and youth centres. "We also want to invite those who do not belong to the typical cultural audience and have perhaps rarely or never visited a museum," Hartwig explains. "My wish is that museums become natural places to stay for children and young people and that threshold fears do not arise in the first place."

The experiences of the new admission price regulation will be further collected and evaluated at the end of the year. The decision of free admission for the under-18s, adopted by the city council since January 1, 2017, applies to 16 municipal exhibition venues: the Archaeological Museum, Caricatura Museum, German Architecture Museum, Hindemith Cabinet, History Museum, Icon Museum, Institute of Urban History, Jewish Museum (currently closed, expected to reopen in 2019), Children's Museum, MMK 123 of the MMK Museum of Modern Art, Museum of Applied Arts, Museum Judengasse, Porcelain Museum and the World Cultures Museum.

Further information is available at