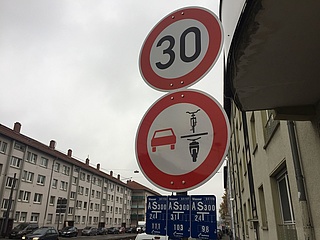 The Schloßstraße in Bockenheim is highly frequented not only by cars, but also by two-wheelers. This makes for dangerous situations time and again, especially since the space that cars and bikes have to share here has since a buffer zone of about one meter has been set up in the area of parked cars, which should prevent accidents that can happen due to suddenly opening car doors. To better protect cyclists in moving traffic, a new traffic sign, which has only been around since this spring, is now being used on Schloßstraße for the first time in Frankfurt. It tells motorists that it is forbidden for them to overtake bicycles and scooters.

In conjunction with markings on the roadway to show cyclists where they should ride, these measures are intended to provide greater safety on the busy street. Of course, this is assuming that both motorists and cyclists interpret the signs and markings correctly and abide by the new rules. If the new signs prove successful in Schloßstraße, they could also be used in other places in Frankfurt to make it safer and more attractive for even more people to switch to bicycles. And it's another small step towards making Frankfurt a cycling city.