More than a shopping mile: A visit to Leipziger Straße
from FFM Aktuell 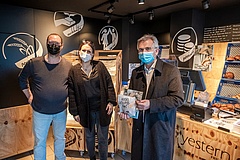 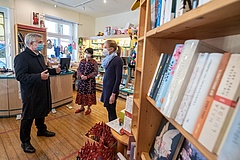 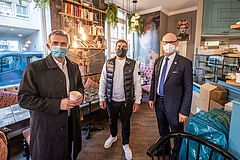 Even in the days before the university, and with it the students, had largely moved to the Westend, Leipziger Straße in Bockenheim pulsated with life and versatility. Since then a lot has changed. Numerous shops have had to close - but new ones have sprung up. The street has managed to retain its very special character. Traditional shops, alternative concepts and a gastronomic scene with recipes from all over the world - Bockenheim is consciously going its own way.

Naturally, there are worries here too - especially with regard to the effects of the Corona pandemic. What's next for Leipziger? Where does the shoe pinch? And how hard does Corona hit the traders? Lord Mayor Peter Feldmann wanted to discuss these and other questions with tradesmen and restaurateurs during a tour of the promenade not far from the old university campus. He was accompanied by the trade association, the district management and Frankfurt's city manager Eduard M. Singer.

"I like being here," Feldmann outed himself as a "Leipziger Strasse fan" right at the beginning of the district visit. "Leipziger is a street of diversity. It shows why the Internet is not the new shopping street. What you find here, you look for in vain on the World Wide Web. Shops with character, multicultural flair, the special Bockenheim vibe."

The tour first took the Lord Mayor and his companions to the Bookstore Eselsohr.This store can justifiably be called a true Bockenheim institution. Since opening in 1982, the "Eselsohr" has become the place to go for anyone who appreciates good children's and youth literature. Whether it's a picture book, a development novel or a toy, you'll find what you're looking for at owner Grischa Götz and founder Ulrike Boessneck-Voigt (still working there) - and always well advised. "They are more than a bookstore," says Feldmann. "The 'Eselsohr' is a cultural place for children and young people, a guide and anchor for parents. After the lockdown, we're going to need places like that a lot more. Our kids need to process what happened."

Continued the tour to "Hucks yesternday", which we already introduced you to in more detail HERE. In the small shop it looks only at first sight like in an ordinary bakery. Because the special thing about the offer here is that the goods are from the previous day and now get a second chance - of course at a discounted price. The profit goes to local social projects. From the mayor's point of view, this is a model idea: "Less food waste, plus commitment to local initiatives, that strengthens cohesion in the district and ensures that Bockenheimers identify with their shopping mile."

Diversity - that's what you often get to see at Leipziger. But especially in the beautiful Frida`s Cafe of the brothers Cagdas and Yoldas Telli. The concept of their charming café: they offer coffee for connoisseurs plus international recipes, implemented with regional products. "You have the Bockenheim mix in a burning glass, if you will," Feldmann said. He hopes - as we all do - that the café motto "Eat, drink, socialize" can soon be filled with life again: "The opening of outdoor gastronomy, which the state government is aiming for on April 1, is a step in the right direction. As a city, we have already done our homework here. The generous special permits from the previous year remain in place. The first building block of my 'Frankfurt Plan' has thus been implemented."

The tour concluded with a visit to Galerie Hake. Owner Isabelle Routisseau is also on the board of the trade association "Bockenheim aktiv". Her wish: a caretaker for the Leipziger, analogous to the successful model for the upper Berger Straße, about which we had just reported HERE.

"I'm happy to take the suggestion," the Lord Mayor concluded. "During the lockdown, many have rediscovered their shopping street around the corner. Together with the boost from the expected relaxations, something could develop here - and bring Leipziger Straße forward as a shopping mile with character. Let's seize this opportunity."

This tour, of course, offered only a small glimpse of the variety of retail and restaurant offerings on Leipziger. But it made it clear how important lively, diverse shopping streets are for city centres and districts. And that there must be concepts on how to revive them after the difficult time of the pandemic, so that they can be preserved for our city in the long term.