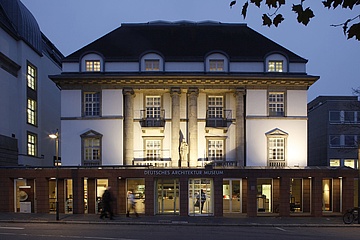 (ffm) The New Frankfurt then and now, the vibrant architectural scene of Bangladesh, the origins of Frankfurt's Paulskirche and pioneers of playground projects - these are the new exhibition themes for 2019 at the Deutsches Architekturmuseum (DAM).

The DAM in Frankfurt presented the exhibition programme for 2019 at its annual press conference on Thursday, 31 January, and drew up a very successful balance sheet for 2018 - 16 temporary exhibitions, the permanent exhibition "From the primitive hut to the skyscraper" and almost 400 events brought a total of 110,712 visitors to the museum in 2018.

In November 2018, the 100,000th visitor to the DAM was honoured. The average number of visitors at DAM is usually between 75,000 and 80,000 per year. The "magic mark" of 100,000 was achieved, in addition to a wide-ranging programme of events and exhibitions, in particular thanks to the major exhibitions "SOS Brutalism", "Ms Architect", "Grand Opera - Lots of Theatre?", "Drive a Bike" and now also "The Always New Old Town", which were very popular with the public.

"These exhibitions offered relevant topics for the general public - close to current events in architecture and urban development. Thanks to the outstanding performance of the entire team, we were able to far exceed the visitor numbers of previous years and welcome over 110,000 visitors to DAM," said DAM Director Peter Cachola Schmal.

The traditional summer and winter holiday program "LegoBaustelle" attracted around 8400 young and old visitors to DAM in 2018.

The 2019 exhibition programme focuses on examples of affordable housing with not one but two exhibitions - from the perspective of New Frankfurt 1925-1933 and with the competition Housing for All Today. In summer, DAM will take visitors on a journey to the vibrant architectural scene in Bangladesh. In addition, in autumn the Paulskirche monument and the pioneering playground designs of the 20th century will come into focus.

The best 25 buildings in and from Germany, including the winner of the 2019 DAM Prize, will be on display until 22 April - the award went to gmp Architekten - von Gerkan, Marg und Partner for the modernisation and conversion of the Kulturpalast Dresden.

As a contribution to the joint initiative of the Historisches Museum, Museum Angewandte Kunst and Deutsches Architekturmuseum for the Bauhaus anniversary, the exhibition "New Man, New Dwelling" shows the architecture of the New Frankfurt 1925-1933. The exemplary housing and urban development program of international renown established the city's fame as a stronghold of modernism (March 23-August 18).

In addition, a two-part lecture series by the CCSA (Center for Critical Studies in Architecture) will take place during the Bauhaus anniversary year, offering a critical look at the Bauhaus. The focus is on architecture: its reception, the migration of the actors and the critique of the Bauhaus are the topics for lectures and dialogues.