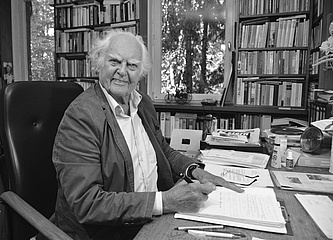 He is considered the spiritual father of the Museumsufer, one who left a lasting mark on Frankfurt's cultural landscape. Now, Frankfurt's long-time head of culture and president of the Goethe-Institut Prof. Dr. hc. Hilmar Hoffmann is dead. Hoffman died on Friday at the age of 92. Between 1970 and 1990, Hoffmann was Frankfurt's head of culture, then president of the Goethe-Institut from 1992 to 2001. His landmark book "Culture for All" was published in 1979.

Mayor Peter Feldmann and Head of the Department of Culture Dr. Ina Hartwig offer their condolences to the family and relatives and express their deepest sympathy. "As a cultural politician and friend, Hilmar Hoffmann was always at my side with advice and support. With his expertise and creative drive, he earned recognition across all party lines," says Lord Mayor Peter Feldmann, once again emphasizing Hoffmann's importance for our city: "Hilmar Hoffmann is one of the founding fathers of our modern and cosmopolitan city. We will carefully cultivate his intellectual and material legacy and always base our actions on his demand for 'culture for all'. His death is an irreplaceable loss for Frankfurt and the German cultural landscape. His services to the Goethe-Institut are also unforgotten. We will miss Hilmar Hoffmann, but never forget him."

With his call for broad cultural participation and the founding of the Frankfurt Museumsufer, Hoffmann had made a name for himself beyond the city limits of Frankfurt. "With Hilmar Hoffmann, we are losing one of the most important cultural politicians not only of Frankfurt, but of the entire Federal Republic. He was a special person who, despite his advanced age, remained awake and responsive to the end. With his demand for culture for all, which is still valid today, he recognized the spirit of the times and actively implemented it. With the Frankfurt Museumsufer, which will forever be associated with his name, he created a brand that will radiate beyond the metropolis on the Main. On a personal level, I am losing a friend who accompanied me warmly, curiously and discreetly. I am very sad and will miss his advice," said Ina Hartwig, Head of the Department of Culture. "His confrontation with his own past, most recently with his time as a Hitler Youth, deserves respect; Hilmar Hoffmann was honest not only with others, but also with himself. He was an unconventional man, thinker and politician; people like Hilmar Hoffmann are destined to be role models - and yet he acted quite normally, even modestly. He was never indifferent, not until the end. The city of Frankfurt mourns Hilmar Hoffmann; it will remain deeply grateful to him."