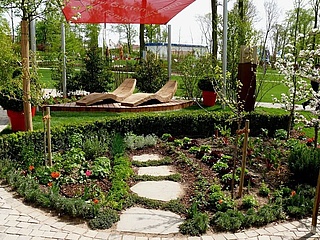 For the weekend we can recommend a visit to the Landesgartenschau in Bad Schwalbach. Because here there are not only many beautiful flowers to admire in gorgeous summer weather. Also otherwise the Landesgartenschau has put together a colorful program, which can come up with some real highlights on Saturday and Sunday.

It starts with the big stage party of the hr4 bike tour 2018 on Saturday, 28 July. For this purpose, the big stage has been set up again at the Moorbadehaus. There, from 7 pm, not only the 600 to 700 cyclists who participate in the tour from the Rheingau through the Taunus to the State Garden Show can celebrate. From 18.00 clock all rock-&sbquo;n'-Roll and rockabilly fans can celebrate with free admission in the area part at the Moorbadehaus, with the band "Boppin'B". Read more about this concert HERE

.Before the stage is rocked on Saturday evening, there is plenty on the day's programme for visitors, from bubble boat building at the steel fountain to design tips for the home garden from students from Geisenheim University at the Gärtnertreff. From 10 a.m. to 4 p.m., the project theater Thespis will be on the grounds presenting "The Everyday Madness of the Cleaners". Karl and Trude, the two "cleaners", bring the theatre to the audience. On the program are cleanliness, order and a lot of fun. On the stage at the Kurweiher the band "tag-aktiv" plays from 14 o'clock on. The jazz quartet stands out with its unusual instrumentation of guitar, drums, flugelhorn/trumpet and piano. It also incorporates pop sounds and influences of Scandinavian jazz in its music.

Acting legend to be guest on Sunday

On Sunday, a very special visitor is expected at the State Garden Show: Actor Heinz Hoenig, known from films such as "Das Boot", "Der Schattenmann" or "Das Traumschiff", will hand over a sculpture to Mayor Martin Hußmann together with the art smith Rüdiger Schwenk from Aarbergen. The 2.30 metre high, 256 kg Corten steel sculpture created by Schwenk himself, a combination of modern high-tech and old blacksmith's art, shows Heinz Hoenig as a peace smith. As such, the actor, who also worked as a blacksmith and locksmith before his film career, has been on the road for some time to campaign for world peace. Two years ago, he founded the campaign "Blacksmiths for Peace" with friends and called on blacksmiths to participate. Two years ago Kunstschmied Schwenk took over the leadership for this project. Peace nails made of red-hot iron and with an embossed dove of peace are produced and sold. The proceeds of this worldwide project go to initiatives that work for a peaceful and humane coexistence on all continents of the world. When Rüdiger Schwenk from Aarbergen heard about the campaign, he immediately joined in and has supported Hoenig ever since. Since the opening of the State Garden Show, Schwenk has been a regular presence on the grounds with his mobile forge, offering the peace nails he forged himself.

The handover and ceremonial unveiling of the larger-than-life sculpture, which will be installed on the grounds of the State Garden Show, will take place on July 29 at 12 noon in front of the Moorbadehaus - whose new portal Rüdiger Schwenk also recently created. The sculpture is the first in a planned series that Schwenk wants to continue under the name "Legends in Steel". In doing so, he wants to honor the commitment of people in public life who are actively involved in freedom and peace.

It will also be hot from 2 pm in the show kitchen with the Frankfurt TV chef Mirko Reeh. In the Röthelbachtal, in the area "Ab in die Obstkiste", he will conjure up delicacies of regional cuisine with a lot of humour and his typical Hessian slouch from 2pm and again from 4pm. Viewers can expect lots of practical tips for the home. Mirko Reeh also invites the audience to try his dishes. The Rhein Main Swingtett proves at 1.30 pm on the stage at the Kurweiher that jazz is still young and lively and attracts musicians and fans of all generations. At 4 p.m. the Sloppy Notes Jazzband will also play there. The Wiesbadeners offer a variety of music from Dixie to pleasing Swing.

When the sun shines strongly again this Sunday, there will be a growing awareness of how valuable water is for people and nature. That's why the State Garden Show is setting up its water cafe&eacute; around the steel fountain. In the artful oasis, visitors can experience shady relaxation while discovering water in a variety of qualities. They will be served with the cool water in a most amusing and comedic manner. And for those who would prefer to dip their feet into the water - that is also possible. The Kneipp Association Bad Schwalbach e.V. invites you to Kneipp from 11 am in the medicinal plant garden.

What else awaits you at the State Garden Show and all other info can be found at: