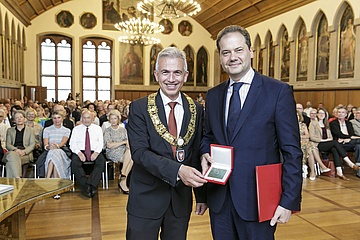 (ffm) The director of the Metropolitan Museum in New York, Max Hollein, will be on Friday, 14th of May. June, was awarded the Goethe Plaque of the City of Frankfurt. “We are proud of what you have created here in Frankfurt“, said Lord Mayor Peter Feldmann at the award ceremony in the Kaisersaal. Max Hollein was director of the Schirn Kunsthalle from 2001, and from 2006 he also directed the Städel Museum and the Liebieghaus - before moving to the USA in 2016. „We don't only remember big exhibitions like Botticelli, Monet or Jeff Koons“, Feldmann said. “We remember the renovations of the museums, above all the Städel with its structural, artistic and digital expansion. “ With the Goethe Plaque Max Hollein now remains connected to the city forever - „a Frankfurt in New York“, said the head of the city.

>Head of Culture Ina Hartwig said: „Max Hollein is an exceptional phenomenon in the culture industry. In our city, he has shown for many years how art and business can be brought together to form a fruitful unity. Frankfurt owes a lot to him, Max Hollein has significantly shaped the museum profile of our city!“

Max Hollein said: “I have not only experienced Frankfurt over many years as a highly valued home for our family. But also as an outstanding international, dynamic and livable city whose urban society has committed itself in an unprecedented way to culture and in particular to the three institutions Städel, Schirn and Liebieghaus. Only in this way was it possible for us to take great steps forward together — and for this I would like to thank the many people and friends who accompanied me here in Frankfurt today “

Hollein was bid farewell in Frankfurt in 2016, took over the management of the Fine Arts Museums of San Francisco. In August, he went to New York as the new director of the Metropolitan Museum of Art. The Vienna-born artist is by no means unfamiliar with the city: in 2001, he came from the Guggenheim Museum there to Frankfurt to visit the Schirn Kunsthalle.