Museum of Electronic Music: MOMEM opens in 2021
from FFM Aktuell 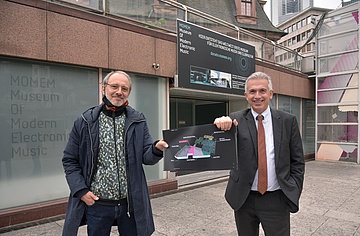 Actually, it should have opened long ago: Back in January 2018, we told you about the plans for the establishment of a Museum Of Modern Electronic Music (MOMEM). At that time, the initiators Alex Azary, Andreas "Talla 2XLC" Tomalla and Stefan Weil had hoped, after more than five years of planning, to open the museum at the Hauptwache at the end of the year. At first, things looked good, and in June 2018, the keys were ceremoniously handed over in the future MOMEM rooms. But then things just didn't go any further. The reason were financing difficulties, which could only be clarified at the end of 2019.

So then the opening was initially planned for the first half of the year, later then for autumn 2020. But now it was the global Corona pandemic that threw a wrench in those plans. But fear not: true to the motto "good things come to those who wait", the MOMEM will finally come in 2021! Before that happens, Lord Mayor Peter Feldmann has already paid a visit to the world's only museum, giving a sneak peek at current developments and plans for the coming year.

"The renovation and refurbishment work has been completed and foreshadows great things to come," Feldmann said. MOMEM maker Alex Azary added, "Currently, the installation of fixtures is underway and the design concept by renowned studio Markgraph is being implemented. We are well on our way."

Parallel planning is underway for the inaugural exhibition, which will not be presented to the public until next year due to Corona requirements. "MOMEM will be a unique museum in the world and will enormously enrich Frankfurt as a cultural location," added Mayor Feldmann. The Hauptwache will also benefit from the museum's charisma. According to its creators, the museum will be "an experience space, a museum and a hotspot for culture," explained the city's mayor - and will provide a home for the wealth of forms of electronic music. Museum content, interactive exhibits and workshops are to make the MOMEM a lively place.

We keep our fingers crossed that it will finally work with the opening in 2021 and look forward to this very special museum, which will enrich Frankfurt culturally guaranteed. We'll keep you posted!