Music project "We are all Frankfurters": A declaration of love to Frankfurt
from FFM Aktuell 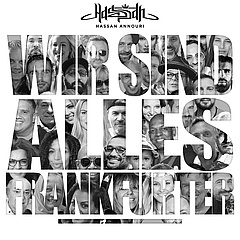 Already in 2010, Frankfurt musician and producer Hassan Annouri created a real Frankfurt anthem with "Hurra, Hurra, die Frankfurter sind da". Now the latest music project of Annouri, who is also known as a restaurateur, radio host of the program Main Frankfurt, creative mind and organizer of numerous charity events, is in the starting blocks: On May 19, "Wir sind alles Frankfurter" will be released, a declaration of love to our city. "It's my new Frankfurt anthem! We don't want to just stand by and watch as the people of Frankfurt become more and more desperate and our inner city becomes a hub for violence. I dedicate it to the people of Frankfurt with the wish that we all stick together right now and stay strong!", says Hassan Annouri about the song.

Of course, there is also a music video that shows the most diverse facets, people and sights of the Main metropolis. The clip was shot, among other places, in the Römer, in the Waldstadion, in the city center, in the Citygate in the Skyline Studios of Radio Frankfurt, from a helicopter flight over Frankfurt and, of course, in Annouri's café-bar NOAH. "We shot Frankfurt from a wonderful perspective," says the Varvani Films director. Eintracht President Peter Fischer, Maccabi President Alon Meyer and Kelterei boss Peter Possmann are also in the mix. Hassan will be accompanied musically by Kaye Ree as a background singer, the violin playing of Peter Zelienka from the HR Symphony Orchestra and Gerre from the thrash metal band Tankard. The whole thing is then accompanied by hip-hop elements of DJ Release.

The musical diversity heard in the song expresses very well the message of unity and diversity that Hassan Annouri wants to convey with this project. City Councilor Mike Josef and Lord Mayor Peter Feldmann also support the project. Sow, the city of Frankfurt will host the artist and his guests on the occasion of the single release on June 2, 2022 in the Paulskirche. We are already very excited about the song and the video!

The song "WIR SIND ALLES FRANKFURTER" is available from 19. May available for download everywhere.