MUSIC SNEAK: Not only cinemas can sneak
from FFM Aktuell 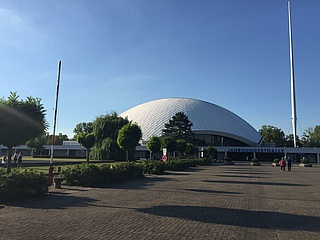 The Jahrhunderthalle is a place full of tradition. The greats of the international music scene have played here. In many places in the house, the past is palpable. And yet, in 2017, they want to do one thing above all: look forward. That's why on 25 March there will not only be the grand opening of the in-house CLUB in the former restaurant of the Jahrhunderthalle, but also the start of a new, extraordinary concert series: the Music Sneak!

The principle is similar to that of the Kino Sneak: visitors buy their ticket, not knowing what music will be offered to them that evening. Three bands will then perform on the stage of the CLUB, announced by slam poet and U20 Hessen champion Finn Holitzka - the host of the evening. There can be quiet singer/songwriter pop as well as hammering rock, folk or electro. No one knows what they're going to see and hear until the acts take the stage.

But one thing is clear: only first-class musicians will be chosen for this series. And who knows: Maybe you will see them again later on the big stage of the Jahrhunderthalle! So if you're in the mood for a musical surprise package, don't miss the Music Sneak.

You can find all further info and the first dates HERE in our event calendar!