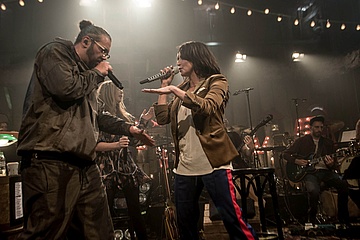 For the fourth time this year, the big Musikmesse festival will take place alongside the Musikmesse at various locations throughout Frankfurt. And this year's festival can really be seen and heard. For the first time, the series of events will take place over five days, from Tuesday to Saturday, 2 to 6 April 2019, with a total of around 40 clubs and venues across Frankfurt taking part, plus numerous evening events directly on the exhibition grounds.

Highlight events include the MTV Unplugged show with Samy Deluxe, the "15 Years of BigCityBeats" event with Timmy Trumpet, a DJ set by Mousse T & Glasperlenspiel, and the closing concert by Gregory Porter and the Neue Philharmonie Frankfurt. The cooperation with the Frankfurt Hotel Alliance further expands the spectrum.

"With new and intensified partnerships, the Musikmesse Festival is even more firmly anchored in the city. For five days, visitors to the Musikmesse and all music enthusiasts in the region will be able to experience how diverse and multifaceted Frankfurt's cultural landscape is", says Detlef Braun, Member of the Board of Management of Messe Frankfurt. Wolfgang Weyand, Director of the Musikmesse Festival, adds: "At the same time, we are positioning the exhibition grounds more than ever as the epicentre of this overall musical experience - with unique concerts in the Festhalle, the Congress Center Messe Frankfurt or on the specially constructed Festival Arena."

Absolute highlights will be offered by the Festhalle Frankfurt on three evenings of the Musikmesse Festival. One of Germany's most successful rappers will do the honours on 4 April: Samy Deluxe will thrill audiences at the SaMTV Unplugged Show with completely rearranged classics and never-before-performed live gems. On 5 April, BigCityBeats, one of Germany's most successful entertainment brands, celebrates its 15th birthday in the Festhalle. At the turntables, Australian star DJ Timmy Trumpet as well as Alle Farben and Le Shuuk, among others, will provide the finest club sounds until the early hours. The festive conclusion of the

Musikmesse Festival will be the gala concert by Gregory Porter, together with the Neue Philharmonie Frankfurt on 6 April. The US American is regarded as one of the most influential voices in jazz today and will be presenting his Nat "King" Cole programme exclusively throughout Germany.

The "Festival Arena" - a circus tent in the middle of the exhibition grounds - is also the venue for unique events. For example, the DJ set by Mousse T. & Glasperlenspiel on Friday (5.4.). Fans of handmade music will experience a special treat on the first day of the fair. The Musikmesse Ultimate Jam presents a genuine all-star band: including Jan Delay drummer Jost Nickel, ex-Prince bassist Ida Nielsen and keyboardist John "Rabbit" Bundrick, known for his work with The Who and Bob Marley.

Frankfurt celebrates - and many partners join in!

For the Musikmesse Festival, numerous organisations from the cultural, creative and tourism industries are pulling together. On an unprecedented scale, Messe Frankfurt is cooperating with the interest group "Frankfurt Hotel Alliance e. V.". 15 hotels in

city centre locations will become event locations for the Musikmesse Festival and offer a variety of musical experiences against a unique backdrop. The spectrum ranges from Berlin indie rock band The Flavians at 25hours The Goldman (2.4.) to DJ Sherry & Darnell The Artists at the Sofitel Frankfurt Opera (3.4.) to Israeli jazz pianist Omer Klein with his trio at the Steigenberger Frankfurter Hof (4.4.) and the SoundBites@GrandSeven with gospel and jazz singer Alfred McCrary (4.4.).

Together with partners in the field of music education, the Musikmesse Festival puts the spotlight on up-and-coming talent. For example, prize-winner concerts of the "Jugend Musiziert" initiative will be held on four evenings in various churches in the city. Four outstanding classical music concerts at the "Dr. Hoch's Konservatorium" Music Academy are also part of the festival. Once again, the grand finale of the "International German Pianist Award" in the Alte Oper Frankfurt will mark the official start of the Musikmesse Festival (1 April). Accompanied by the Philharmonie Baden-Baden under the baton of conductor Douglas Bostock, young top pianists will showcase their skills.

Other supporters of the Musikmesse Festival include the Frankfurt Jazz Initiative, the venue association LiveKomm e.V., the regional network Clubs am Main, the musicians' network Backstage Pro - as well as a total of around 40 event venues in the city, including Batschkapp, Das Bett, Gibson Club, Nachtleben, Palmengarten, Silbergold, Zoom and many more. The Musikmesse Festival's highlight events in Frankfurt's clubs will be announced shortly.

The festival ticket costs 15 EUR and grants discounted or even free admission to the Musikmesse Festival events.