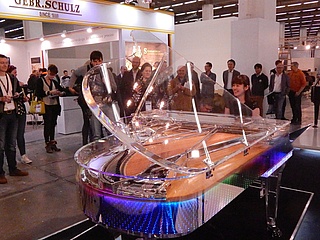 Whether the Musikmesse Festival, the new Beck`s Wood & Brass Stage, the redesigned Music Education area or the Guitar and Drum Camp - this year the Musikmesse is thrilling visitors with many innovations and additions to the already great trade fair concept. Dealers, industry professionals, musicians and music enthusiasts: they will all meet in the coming days at Musikmesse (5 to 8 April 2017) and Prolight + Sound (4 to 7 April 2017). The international trade fairs showcase product innovations that make the world go round - and that turn an event into a spectacular occasion. In addition to products from 1,922 exhibitors from 55 countries, Musikmesse and Prolight + Sound also offer lots of live music, presentations, special promotions, autograph sessions and workshops. In addition, of course, visitors can still find out about all the important trends in the market for musical instruments, music software, sheet music and accessories.

At the Musikmesse you can not only experience music, make it yourself, but of course also listen to it. Thus, there are four stages and numerous event areas on the grounds, where the diversity of music will be reflected. The Center Stage will feature performances by well-known artists from various genres, while the Acoustic Stage will feature "handmade" music from jazz, folk and classical music. In addition, there is the Yamaha Main Stage, where the Japanese traditional company presents its artists.

On the new Beck's Wood & Brass Stage, the stars of brass music will set the mood. In addition to well-known formations from the field of brass music, the "Copa Kapella" competition will also take place here, allowing newcomers to get a place on the main stage at the "Woodstock of Brass Music"!

After last year's successful premiere, the Drum Camp is going into a new round. World-class musicians will give daily live performances on original touring equipment - including Robbie Williams drummer Karl Brazil as well as Jost Nickel (Jan Delay) and Chris Coleman (Chaka Khan). Likewise, the concept will be expanded to include guitars. Thus, Guitar Camp features performances by artists such as Nico Schliemann (Glasperlenspiel), Jen Majura (Evanescence) and Jeff Waters (Annihilator). In addition, there will be meet and greets with all the musicians as well as numerous drum and guitar workshops. 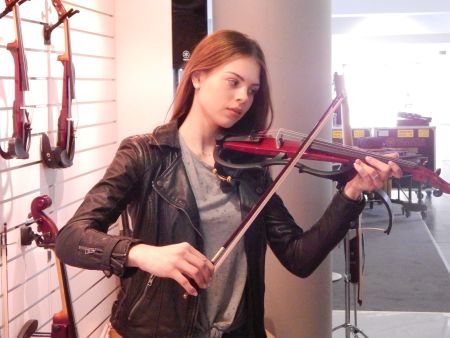 Under the theme area "Music Education", the Musikmesse bundles educational and socially relevant offerings related to music making. If you are still inexperienced and don't know exactly which instrument is right for you, the Discover Music area is just the place for you. Here you can take your first steps on an instrument, with experienced musicians from the Frankfurt Music Academy on hand to advise you. Together with many partners from education, culture and business, Messe Frankfurt is organising the Musikbiz & Culture Forum. Here, lectures will be held on all aspects of the relevance of making music, as well as on career opportunities and creative techniques. The InstruMental Room will provide an exciting insight into the world of music therapy. In addition, the specialist day "KlassenMusizieren" (Making Music in Classes), which is aimed particularly at music teachers and students of music education, will be held as part of the Music Fair. The patron for the Music Education section is Boris Rhein, Hesse's Minister for Science and the Arts.

For four days, music is also the number one topic in Frankfurt away from the exhibition grounds. The Musikmesse Festival offers exciting concerts in over 30 clubs and event locations in the city. Highlights include Oleta Adams & the hr-Bigband (8 April, Congress Center Messe Frankfurt), the NDW band Extrabreit (6 April, Das Bett), star trumpeter Till Brönner (6. April, Congress Center Messe Frankfurt) as well as Grammy Award winner and Billy Idol guitarist Steve Stevens & Band (April 7, Batschkapp, special guest: Gus G.). Another highlight of the festival is David Garrett, who will be awarded the Frankfurt Music Prize. Visitors to the Musikmesse will receive a free festival wristband, which they can use to attend Musikmesse Festival events at a reduced price or even for free.

The new points of attraction at Musikmesse strike a chord with the sector: for example, many companies are taking advantage of the opportunity to present themselves in the immediate vicinity of crowd-pullers such as Drum Camp and Guitar Camp. Some brands, some of which have not had their own stands at Musikmesse for several years, will be back in 2017: including Ibanez, Warwick, Sonor, Tama, Meinl Cymbals, Remo, Orange, Beyerdynamik and more.

In addition, this year's Musikmesse will once again be a showroom for exciting innovations relating to music-making. For example, the world's first violin created using 3D printing technology will be on show - as will the first carbon flugelhorn. A trend that will also be evident at this year's Musikmesse is hybrid instruments, which combine the advantages of analogue and digital sound generation. In total, visitors can experience the products of 972 exhibitors at the fair.

Prolight + Sound: presentation and information platform for a multi-faceted industry

The live entertainment industry continues to be on the upswing - the market for events in a business context is also developing encouragingly. With the increasing demand for events and high expectations for spectacular staging, the need for investment in modern event and media technology, such as that presented at Prolight + Sound, is also growing. Despite the market consolidation that is also emerging in this sector, the omens remain positive.

Prolight + Sound is also expanding its range of themes this year. With Faces Behind The Voices, for example, the fair is presenting a multimedia exhibition on Germany's best-known dubbing voices (find out more about this great exhibition, which has already been a guest at Frankfurt Central Station, HERE). The new special area Silent Stage offers tips on better stage sound and also invites Musikmesse visitors - as does the disc jockey area DJCon. With more than 70 specialist lectures, Prolight + Sound helps professionals from the sector keep up to date with the latest developments on the market. On Future Talents Day, which takes place on the Tuesday of the fair, the focus is particularly on newcomers to the industry: Students and vocational school pupils will learn more about career scenarios in the event industry in presentations.

The six hall levels of Prolight + Sound bring the creative potential of the industry to life. The offerings range from impressive laser, fire and water effects to 3D projection and automatically controlled microdrones, which can be experienced in spectacular flight choreographies. Key players from all areas of the event technology industry will be presenting their innovations - a total of 950 exhibitors will be showcasing their products at Prolight + Sound 2017.

In the wake of a change in the order of days at Musikmesse, which this year opens from Wednesday to Saturday, the two trade fairs will be held together over three days in 2017. This will further strengthen the synergies between the two events. Visitors to Musikmesse can also visit Prolight + Sound during the overlapping days - and vice versa.