MyZeil gets a new escalator
from FFM Aktuell 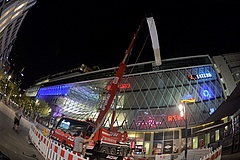 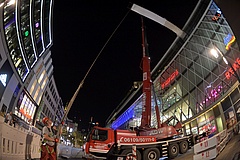 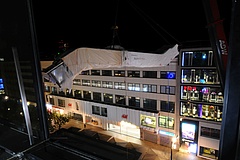 At night it is actually always relatively quiet on the Zeil. Not so in the night from last Tuesday to Wednesday. Because there was a lot of activity around the shopping center MyZeil. The reason was the delivery of two new escalators, which were brought to the 4th floor by crane. These escalators are part of the major redesign of the 4th floor of MyZeil, which will be transformed into FOODTOPIA in the coming months (we told you about it HERE)

The new escalators are also designed to take visitors from the 4th to the 3rd to the 2nd floor in less than 120 seconds, and then back to the ground floor via the existing escalators to the Zeil exit.

From 8pm, the Zeil was already closed in the area in front of the MyZeil shopping centre so that a mobile crane with a 90 tonne load capacity could be erected first. The installation of the escalators took place from midnight until about 8 o'clock in the early morning. With 15 people and an elaborate static concept, whereby interventions had to be made in the shell of the building, the two 7.5 tonne escalators were lifted into the 4th floor.

Producer and supplier of the two escalators is the company Thyssenkrupp from Hamburg. The final insertion of the escalators into the respective floors will take place in the coming weeks/months. Commissioning of the two escalators is scheduled for the 4th quarter. With this functional measure, a further milestone has been reached before the work on the ground floor will be completed in November and new WC facilities on the 2nd floor will be finished. Overall completion of the new food and entertainment destination is scheduled for April 2019