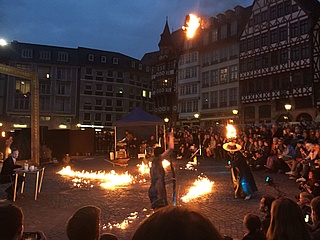 Museums, moon and stars - NACHT DER MUSEEN attracted over 40.000 people to the nightly art experience in Frankfurt and Offenbach

(kus) Pleasant spring temperatures, a colorful cultural program and renowned artists attracted thousands of interested night owls to Frankfurt and Offenbach on May 6. More than 40,000 visitors strolled through over 40 museums and art venues on the Main. Exciting performances, scenic readings and handmade live music transformed the NACHT into a total work of art for all the senses.

"This year, too, the 18th NACHT DER MUSEEN thrives on diversity. Both the culturally experienced and the newcomers had the unique opportunity to gain new insights into the city's cultural offerings at a late hour in an informal atmosphere. An exceptional programme and the truly unique Museumsufer attracted thousands of night owls from the entire Rhine-Main region and beyond to Frankfurt," says head of culture Ina Hartwig.

True crowd pullers such as the Schirn Kunsthalle with its exhibition on Ren&eacute; Magritte and the Deutsches Filmmuseum, where visitors immersed themselves in a universe of the symbolic film colour red, generated amazed looks and lively conversations. The guided tours of the Fishermen's Vaults, the Kaisersaal, the catacombs of the main railway station and the Senckenberg Natural History Museum were particularly popular. There was also a big crowd at the Museum für Kommunikation, where

visitors celebrated a reunion with the flashy cult decade between poetry slam, the classic quiz Ruck Zuck with showmaster Roberto Cappelluti and 90s hits. A thriller experience with goose bumps was provided for the audience by the hr2 RadioLive Theatre with "The Hound of the Baskervilles" in the Historical Museum. Another highlight of the NIGHT was the performance by antagon theaterAKTion, which transformed the Römerberg into a fiery theatrical backdrop.

The gentle giant Dundu enchanted the audience with his performances in Metzlerpark and on the roof of Skyline Plaza. Far away from the museum bank, on the 54th floor of the Main Tower, visitors queued up to make the "Treadmill Runner" work up a good sweat by giving him speed commands on the treadmill - the unusual performance in interaction with the visitors took place with heavenly views of the Frankfurt skyline at night.

A mixture of off-scene and city history was offered by the programme in Frankfurt's Gallus, whose versatility and vibrancy impressed head of culture Ina Hartwig during a visit to the district: "The Gallus has its very own charm, it is not smooth and licked, rather rough and edgy. Art and culture have found their way out of their nooks and crannies, noticeable for all NACHT enthusiasts, electrifying and enriching."

In the Wartturm, visitors were able to catch a glimpse of the otherwise closed tower interior, in the Boxring, the jazzy original compositions of "The WhereMe?!" with melancholic sounds and rousing guitar solos, and the reading by cult author Wladimir Kaminer at konfuzius franz/korrekt culminated in the already legendary, exuberant Russian disco.

In Offenbach, exciting exhibition concepts of contemporary art, the staging of the "Blue Crane" and harbor tours convinced the visitors. In the presence of Offenbach's and Frankfurt's mayors and heads of culture, the city sonorously inaugurated the Hafenplatz; to a mix of hip hop and songwriter pop by Akua Naru and Mine, an exuberant audience celebrated and danced in the dusk.

The tunes of NACHT ranged from guitar and song by candlelight in the cathedral to jazz in the Museum Angewandte Kunst and synthesizer sounds and the tracks of the Robert Johnson DJs in the Deutsches Architekturmuseum. While the electronic beats of DJs Maurice Walper and Alexander Antonakis resounded from the Metzler Hall, dance enthusiasts on the roof of the Skyline Plaza let the NIGHT fade away atmospherically until dawn.

"Young Art with a Future" was auctioned off as part of the EY benefit auction at the Museum Angewandte Kunst: the selected works by young artists from Frankfurt's Städelschule and Offenbach's Hochschule für Gestaltung (HfG) went under the hammer and were sold for a record total of 101,900 euros. The highest sum was achieved by the work "Zuflucht" (Refuge) by Stefan Thürck with 14,000 euros; the Head of the Department of Culture, Ina Hartwig, auctioned the first item for 3,800 euros. The proceeds will go to the artists and to the sponsoring associations of the Frankfurt and Offenbach art academies