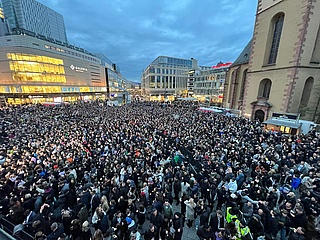 At the beginning of April, the Hauptwache had turned into a big party area for one night, when the opening of the MOMEM - Museum of Modern Electronic Music was celebrated (see photo). Even though this was probably a unique event on this scale, the square around the museum is also to become a meeting place for many people in the future, where they can let the week come to an end. The goal: The city center is to be animated and other places particularly in the north end, at which many Ausgehfreudige meet in the evening, relieved - about which particularly the residents of these places will be pleased.

Gemeined are there in particular the Friedberger place, Luisen place, Merian place, Matthias Beltz place and the forecourt Kleinmarkthalle. But how are people to be lured from these established squares into the city center? Head of Public Order Annette Rinn, together with the "Round Table for Outdoor Life at Night," has developed ideas for this, which will be implemented for the first time on April 29. April to be implemented:

"Food trucks, food and drink stands and music from the new MOMEM (Museum of Modern Electronic Music) will hopefully make the new 'place to be' at the Hauptwache so attractive that people will withdraw from the Nordend around 10 p.m. and continue to party on the Hauptwache," says councilwoman Rinn, who herself will be on site on 29. April locally at the Luisenplatz and at the main guard will be, in order to point with representatives of the local advisory board, the residents, the national and the city police, the staff department clean Frankfurt as well as the FES to the new offer.

It will have to show however only whether this new offer is also accepted. Finally straight the place before the MOMEM does not have straight the call to be one of the more attractive places in the city center. Whether there food trucks and music are enough to make the Hauptwache in the long term to the desired point of attraction, where people like to meet, can be judged only in a few months.