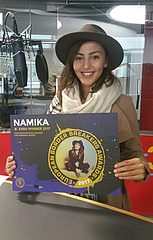 In Frankfurt today, Namika was announced as the third winner of the European Border Breakers Awards 2017 (EBBA), the European music awards for emerging artists. Namika was surprised by this on the Hr3 afternoon show by Kate Menzyk.

Born and raised in Frankfurt, Namika made it into the German charts with her distinctive style of R&B and hip hop in 2015 with the single "Lieblingsmensch". The single spent an impressive 43 weeks in the German music charts and also made it to the charts in Austria and Switzerland. An outstanding live art artist, Namika also performed at numerous events and festivals across Europe in the summer of 2016.

Previously, Alan Walker (Norway) and Jaakko Eino Kalevi (Finland) were announced as winners of an EBBA. In the coming weeks, a total of ten EBBA winners will be announced. The award ceremony will take place on January 11 in Groningen as part of the Eurosonic- Noorderslag festival.

Each year, 10 European artists are awarded for their success in countries that are not their home country. This success is measured by the following criteria:

The European Border Breakers Charts, launched earlier this year and compiled by Radiomonitor, are a ranking of tracks from across Europe and are based on airplay figures abroad.

To be nominated for the 2017 awards, artists must have cross-border success with their first international release in Europe between August 1, 2015 and July 31, 2016, and come from a country participating in the EU's Creative Europe program.

The EBBA, now in its 14th year, is an EU prize and is organised by Eurosonic Noorderslag in collaboration with the European Commission (Creative Europe) and the European Broadcasting Union with support from Buma Cultuur, the Dutch Ministry of Education, Culture and Science, the Province of Groningen, the City of Groningen and Music Week.

One of the winners will receive a Public Choice Award based on voting on the EBBA website from the end of November 2016 until Christmas. Up to ten voting participants, randomly selected from different countries, will be invited to the award ceremony: Each may bring a friend, and airfare and hotel expenses will be covered.

The winners will receive their prize on 11 January 2017 in Groningen, the Netherlands, at the award ceremony taking place as part of the Eurosonic Noorderslag festival, which will be hosted by TV star and musician Jools Holland and at which the winners will perform.