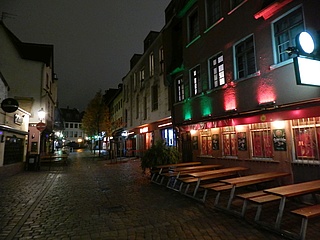 After the federal "emergency brake", an amendment to the Infection Protection Act, was nodded off by the Bundesrat and Bundestag despite some legally questionable points, the Federal Infection Act has now also been signed by Federal President Frank-Walter Steinmeier. Thus the law applies starting from Friday (23.04.) and some changes and intensifications come into force, which apply then also in Hessen. Particularly controversial is the nightly curfew, which is to be imposed for three consecutive days if the incidence exceeds 100. But private meetings, school and day-care centers, shopping, work and leisure are also affected. The regulations, which are tied purely to incidence levels, are to be in place until at least June 30.

It's important to note: These regulations go into effect automatically! Once the incidence level is exceeded in a county or incorporated city for three consecutive days, they must be implemented the day after next. They are only withdrawn as soon as the incidence is below the corresponding threshold value on five consecutive days. Then the rules must also be rescinded on the day after next in the respective district or the respective independent city.

Update: For the entry into force of the regulations, the figures of the RKI apply, not those of the local health departments!

.If the incidence in a county or incorporated city is 100 or above for three consecutive days, a 10 p.m. to 5 a.m. curfew automatically occurs the day after next. Walking or jogging is still allowed between 10 p.m. and midnight, but only alone. After midnight, people are only allowed to be outside of their own homes with a valid reason. These reasons include doctor's appointments, walking to or from work, or walking the dog.

Update: The counties/county-free cities are allowed to tighten these regulations themselves. For example, the city of Offenbach does not have to move the curfew that was established for 9 p.m. to 10 p.m.

If the incidence is 100 or above for three consecutive days, meetings - both in private and in public - are again limited to your own household plus one other person. Children 14 and under do not count.

Special tightening measures come into force here as soon as the incidence value is at or above 100 for three consecutive days. Then alternate classes are in effect at schools. If the value is at or above 165, schools will be closed completely the day after next and all classes must return to distance learning - except for graduating classes and special schools. Emergency care may be provided.

In addition, it remains the case that students, as well as teachers, must test (or be tested) twice a week to be allowed to participate in face-to-face instruction.

In day-care centres, an incidence of 165 on three days in a row also means that only emergency care is possible.

Update: At an incidence of less than 165, grades 7 - 11 that were previously in distance learning will now also transition back to alternate learning!

Wherever possible, workers must be allowed to work from home. Where this is not possible, companies must provide each employee with two Corona self-tests per week.

Importantly, hardware stores are no longer among the businesses allowed to remain open when the incidence exceeds 100.

Update: At an incidence of 100 - 150, stores are again allowed to offer "Click & Meet" - that is, shopping by appointment. This can only be accepted in conjunction with a negative corona test.

Hairdressers may remain open, but may only be entered with an FFP2 mask and a negative rapid test. The same applies to medical chiropody and other body-related services performed for medical, therapeutic or nursing reasons. Cosmetic and tattoo parlors, on the other hand, must be closed....

Cultural events will remain banned at an incidence of 100 and above. Cultural facilities such as museums, theaters, cinemas, swimming pools, amusement parks and even clubs must also remain closed. Zoos and botanical gardens may keep their outdoor facilities open. However, a prerequisite for a visit is also a negative rapid test, whereby self-tests carried out at home do not apply. Drive-in movie theaters may also remain open.

In counties and incorporated cities with an incidence over 100 for three consecutive days, restaurants, cafes and eateries must remain closed, even in outdoor areas. Pickup service is allowed until 10 p.m., delivery service beyond that.

In buses, trains as well as taxis, FFP2 masks must be worn at an incidence of 100. Only controllers and service personnel may alternatively wear an OP mask.