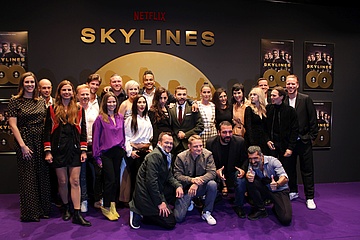 Last Wednesday, the purple carpet was spread out in front of the new Henninger Turm to celebrate the world premiere of the fourth German Netflix original series SKYLINES. The invited guests enjoyed the view over the Frankfurt skyline, which of course also plays a leading role in the series, in the exclusive ambience of the Franziska Restaurant. But before it went to the party above the rooftops of the city, makers, actors and rappers from the series first gave themselves the honor on the purple carpet.

The cast Edin Hasanovic, Peri Baumeister, Erdal Yildiz, Anna Herrmann, Sahin Eryilmaz, Carol Schuler, Kim Riedle, Christopher Schärf, Charles "Booz" Jakob, showrunner Dennis Schanz, rappers Nimo, Azzi Memo, Olexesh, Azad, Twin, Celo& Abdi and numerous other guests were welcomed by a veritable storm of flashbulbs. Even if such premieres do not take place in Frankfurt as regularly as in Berlin or Cologne, it became clear here that the Main metropolis is not only suitable as a filming location, but that glamorous premieres can also be celebrated here.

And Netflix could not have chosen a better place than a location with a view over the entire city. Because Frankfurt is simply a central character of SKYLINES, whose first season (6 episodes) has been available on Netflix since September 27. The series centers on young hip-hop producer Jinn (Edin Hasanovic), who dreams of making it big with his beats. He could make his breakthrough with the help of the legendary label Skyline Records, which offers him an exclusive producer contract. But success comes at a price. While Jinn has to struggle with his conscience, successful rapper and label boss Kalifa (Murathan Muslu) is dealing with completely different problems. Since moving Skyline Records from Offenbach to Frankfurt, Kalifa has actually sworn off shady deals. But when his brother turns up, he is in danger of being drawn back into organised crime. And it's his old love Sara (Peri Baumeister), of all people, who has since become a police officer and is investigating his brother.

SKYLINES is admittedly not free of clichés. But the way in which the Frankfurt rap scene, the world of finance and real estate, and the darker side of organized crime are intertwined here certainly has a certain suspense and entertainment value. Fans of the music scene will get their money's worth from the numerous guest appearances by local rap celebrities and the rousing soundtrack. And - you really have to hand it to the makers - Frankfurt looks really good once again - even if not only the beautiful sides of the city are shown.

Go HERE to the SKYLINES page on Netflix