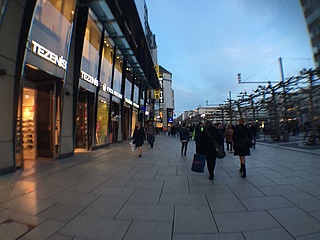 (ffm) The coalition members of the new hessian federal state government from CDU and Greens agreed in their coalition contract on creating right security for sales-open Sundays in the future. Markus Frank, Head of Economic Affairs and Public Order, very much welcomes this project: „In 2006, when the Hessian Shop Opening Act was passed, it was the legislator's intention to write approval rules for up to four Sundays open for sale annually into the Shop Opening Act. Ultimately, however, the fact that the occasional reference was not further specified or clearly defined in the law meant that Sundays open for sale were no longer possible in most cases in conformity with the law.“

“ It is time to create legal certainty here“, emphasises City Councillor Frank. For this topic has been regarded as urgent by numerous trade associations, entrepreneurs, players in city marketing and representatives of the cities and municipalities in Hesse for many years, so that they have repeatedly turned to the state government. Since 2012, Sunday sales in Hesse have been the subject of complaints and courts have repeatedly considered the permits granted by local authorities for Sunday sales to be illegal. The reason for this is the very restrictive criteria that the courts have developed over the years on the basis of the currently applicable rules in the Hessian Shop Opening Act. For most municipalities, this has made it impossible to obtain legally compliant approval for Sundays that are open for sale. As a result of these uncertainties, which each entailed a considerable economic risk and, with the usual short-term cancellation, also damage to retail companies, numerous municipalities no longer attempted to hold Sundays open for business. Others, who nevertheless dared in the interest of their inner cities, had to reckon with getting into the focus of the plaintiffs. Approval practice in the municipalities varied. The associations also criticised the unequal treatment of municipalities, which they perceived as distorting competition. They also justified their approach to the Hessian state government, which was supported by City Councillor Frank, by the fact that in times of prospering online trade, in which considerably more commitment is necessary to preserve the inner cities than ever before, all possibilities had to be taken to increase the attractiveness of the inner cities and district centres and explained: “Sundays open for business have proven to be a successful instrument for the retail trade“.

„I am sure that our new state government will promptly create practicable and transparent regulations that will enable legally sound decisions by the municipalities to be made on Sundays with open sales“, City Councillor Frank was optimistic when reading the new coalition agreement.