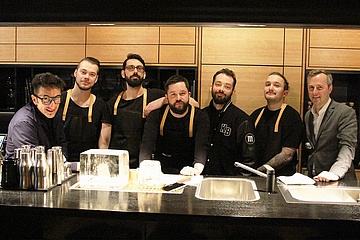 For a few days now, Frankfurt's Bahnhofsviertel has been enriched by a scene address: The Black Dog Temperance Society has opened in the hotel Le M&eacute;ridien on Wiesenhüttenplatz. With the bar, The-Kinly-Bar operators Ren&eacute; Soffner and restaurateur Radu Rosetti want to set new accents in the Bahnhofsviertel. Hotel director Wolfgang Selinger was convinced at the opening that this will succeed: "The bar has what it takes to become an absolute trendy meeting place very quickly and means a real upgrade for Wiesenhüttenplatz, which is increasingly becoming a hotspot in the Bahnhofsviertel. I am very pleased that the two operators have chosen our hotel, of all places, as the location for their latest coup."

Soffner and Rosetti want to score points with high-quality cocktails and "playful" bar food, whereby the focus during production is to be on re-distillation, clarification, sous-vide cooking and fermentation, among other things. It is also important to the two that only the best is offered to the guests. That's why they place the highest demands on the quality of their cocktails and food - which is why they operate a separate production facility in the Bahnhofsviertel to manufacture some of the ingredients. To guarantee the high standard behind the bar, the operators have engaged Matthias Noori as bar manager, who is known to Frankfurt locals from Roomers and Kinly. The centrepiece of the Black Dog is the seven-metre-long bar, which is designed so that bartenders and guests can communicate with each other at the same height. Soffner focuses on transparency; the guest should be able to look at the bartender's hands, the usual separation between work area and bar table is thus completely eliminated.

In terms of furnishings, the focus is on a rather minimalist style. "Design furniture and superfluous decorations do not exist," reports Wolfgang Selinger. The cocktails are already highly sophisticated in the mise en place, i.e. in the preparation. This includes, for example, "Michael Jackfruit" made of cachaca, jackfruit, apricot plum kefir, tepache and limewater, whereby it is a sous vide infusion. The naturally fermented Tepache - pineapple beer - is house-made, as is the Apricot Plum Kefir. There's also a focus on low-alcohol drinks, such as those made with non-alcoholic port. For the alcohol-free "Port Williams" made of port juice, pear, pickled apple and miso, the alcohol was distilled out of the port wine with the help of a rotary evaporator. A few specials are also on the experimental bar food menu. Drinks here, for example, can be accompanied by sous-vide cooked beef bone marrow and port wine juice onions, or handmade ricotta cheese with sauce pistou confit cherry tomatoes and herb ash.

There are around 70 seats at Black Dog, which, incidentally, takes its name from Soffner's dog Hector. "The bar is completely independent of the hotel," Selinger points out. The hotel director sees it as a coherent addition to the hotel's own Legacy Bar: "Black Dog has a completely different concept than our Legacy Bar, not only in terms of the offer. For example, it is smaller, more intimate and is also open longer." With the Legacy Bar and the neighbouring Roomers Bar, Black Dog is turning Wiesenhüttenplatz into a new nightlife hotspot in the trendy district around Frankfurt's main railway station