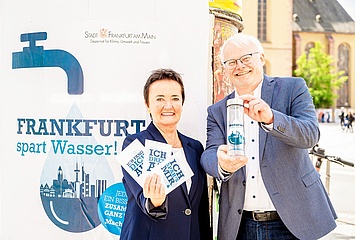 Water is becoming increasingly valuable. And, given the lack of rainfall, also increasingly scarce. That's where water conservation naturally becomes an important measure to counteract declining water tables. "Each one a little, together a lot. Join in!" - is the slogan under which the city of Frankfurt am Main is now launching its campaign to save water. Over the next three weeks, posters with the campaign motif, a water tap and the Frankfurt skyline in a drop of water will be displayed on 317 advertising pillars in the city. "Each and every one of us can help save water. When brushing your teeth, for example, don't let the water run; when washing vegetables, collect the water and use it to water flowers. Saving water is not that difficult, but it is effective. Because every drop that is not wasted counts! That we all handle drinking water carefully and sparingly again, that's what we want to achieve with our campaign," said Rosemarie Heilig, head of the climate and environment department, at the presentation of the water-saving campaign on Tuesday, May 24, at the Hauptwache.

"The climate crisis has long been here. Frequent and long periods of drought, the low rainfall and the resulting drop in groundwater levels are our concern, as are sudden heavy rain events," Heilig explains. "We need to change our behavior, even in the everyday."

"Frankfurt am Main is the municipality with the highest absolute drinking water consumption in Hesse and requires large supplies from the region. Therefore, the growing city of Frankfurt has a special responsibility," explains Peter Dommermuth, head of the environmental department. The magistrate had therefore adopted in February a municipal water concept, in which the information of the Frankfurt citizens is an essential component.

The tips for saving water in the household, in the garden and with the hygiene as well as worth knowing about the topic water supply are available immediately on frankfurt.de/wassersparen. The poster campaign is accompanied by a raffle in the social media. As a prize, there are drinking bottles with campaign motifs. Postcards with the three motifs will be displayed in public places such as district libraries, restaurants, cafés and the like, in order to reach citizens there with very specific water-saving tips.

Further information on the campaign "Frankfurt saves water!" can be found at frankfurt.de/water-saving.