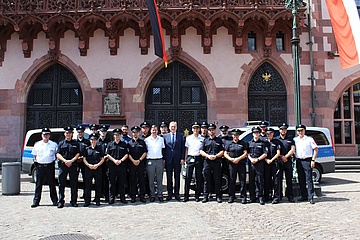 (ffm) The city police of the public order department has received reinforcement. On June 14, eight city police officers completed their training. Since then, they have been deployed in regional patrol duty on Frankfurt's streets, roads and squares. Another ten officers began training on May 1.

The training of the municipal police comprises around 900 hours of instruction in approximately 8 months. This includes all topics of legal and operational training across all areas of activity of the city police. The training modules are repeatedly interrupted by job shadowing in everyday service. Recruitment requirements are majority, a completed school and vocational training, the health suitability, the driver's license class B and of course no criminal record.

Security Department Markus Frank is satisfied: "We have succeeded despite tight budgets to realize new hires in the city police. Security and order determine the quality of life of the people in Frankfurt. It is my personal concern to take on the challenges that await us in Frankfurt with a well-equipped and trained municipal police force. However, these 18 new hires are not enough. In a city that is growing as fast as Frankfurt am Main, it must also be possible in the future to strengthen the city police adequately for the tasks at hand