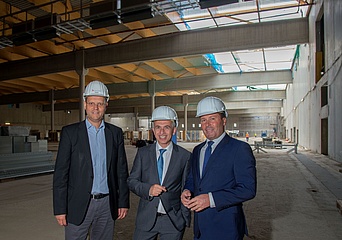 (kus) On the occasion of the topping-out ceremony for the new Exhibition Hall 12, Peter Feldmann, Lord Mayor of the City of Frankfurt am Main and Chairman of the Supervisory Board of Messe Frankfurt, informed himself about the progress on Frankfurt's largest construction site.

Feldmann was accompanied on his tour by Wolfgang Marzin, Chairman of the Board of Management of Messe Frankfurt. The Lord Mayor was impressed by the rapid progress of the project. "A lot has happened since the foundation stone was laid around a year ago. We are delighted with this major investment and Messe Frankfurt's clear commitment to Frankfurt as a location. I am pleased that our city can build on companies that think ahead for the people in the region," praised Feldmann.

Marzin in turn took the opportunity of Feldmann's visit to emphatically praise the work of the builders and the Max Bögl, Ed. Züblin AG and Engie Deutschland GmbH consortium: "We are very happy to be building this new hall with an efficient consortium. The Hall 12 project is now halfway through," Marzin went on to explain. "In terms of building mass, a large part has already been realised. In the time until the first trade fair in Hall 12 - the Automechanika 2018 - all the technical development will now follow."

The two-storey hall designed by Kadawittfeldarchitektur GmbH will open in August 2018. The building will be around 248 meters long and 118 meters wide, with a height of around 30 meters. The exhibition space totals approximately 33,600 gross square meters.

An integral part of the façade design of the new exhibition hall is the Via Mobile, the covered and glazed transport system with moving walkways and escalators that connects all exhibition halls.