New Corona Loosening for Hotels and Gastronomy
from FFM Aktuell 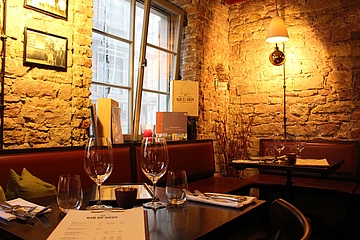 After the first joy about the announcement that gastronomy will be the first sector to be opened to the public from the 15th century onwards, the new Corona Loosening will be introduced. After the first joy over the announcement that the catering trade can open again starting from 15 May, disillusionment followed for many operators and operators of catering trade enterprises in view of the 5qm rule valid in Hessen: An opening is economically simply not feasible under these conditions. But now this rule is being overturned in the course of a further relaxation - much to the delight of Economics Director Markus Frank: "The catering trade is an industry of great importance for our city and it is a great relief for our hospitality industry that the rule that only one person is permitted per commenced five square metres of guest area will be dropped as of Thursday. In these challenging times, the restaurants that are open send out important impulses for all of us - we have felt in recent weeks how much these splashes of colour and culinary pampering are missing.

is also relieved by Madjid Djamegari, Chairman of the Initiative Gastronomie Frankfurt, who had been a committed campaigner against the 5 square metre rule: "We are happy that our persistent efforts to abolish the 5 square metre rule were successful and would like to thank in particular those responsible in the Frankfurt City Council for their active support. This and the generous opportunity to expand the outdoor catering areas will enable Frankfurt's restaurateurs to take the next step towards the economically viable operation of their restaurants during this period".

"I am very pleased that the Hessian state government has now finally abolished the five-square-metre rule and adopted the national standards. The commitment to realistic distance rules has paid off. Just last week, on visits to Frankfurt's taverns, I was able to see the hardships that this rule has brought to the catering trade. Under these circumstances it was not possible to operate the restaurant economically. With the seat spacing of 1.5 metres, a further step towards normality is now being taken. I continue to rely on the common sense of the people of Frankfurt, who have so far behaved in an exemplary manner when it comes to restaurant visits," says Lord Mayor Peter Feldmann.

With the new Corona Contact and Operating Restrictions Ordinance (valid from Thursday, 28 May), the seat spacing of 1.5 metres must still be maintained. This minimum distance does not apply between persons who belong to their own household or who have an appointment with the former as members of another household to visit a restaurant.