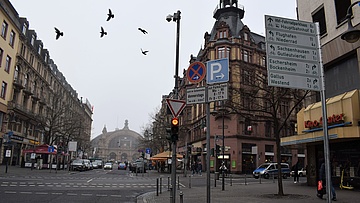 Frankfurt should become more attractive for cyclists. Anyone who often moves through the city on a two-wheeler will agree that a lot still needs to be done to achieve this. But it is also obvious that a lot has happened in the last few months to make it safer and more pleasant to switch from car or public transport to bicycle. Specially marked cycle paths, parking facilities or new traffic signage are some examples of how Frankfurt wants to transform itself into a cycling city. Now another helpful offer for cyclists has been added:

In the area of Bahnhofsviertel, Dornbusch and Goldstein, the signposting crews of the Office for Road Construction and Development (ASE) have been busy in recent weeks. With the result that head of transport Klaus Oesterling can be pleased about positive news shortly before Christmas: Because the green and white bike signs are now also in Dornbusch, in the station district and in Goldstein, to show cyclists the right way in the future.

While the concrete of the sign posts in the district Dornbusch is already dry, it is still very fresh in the station district and in Goldstein. The last signs were installed here last Friday or will follow until December 23. "On our way of signposting the entire city area, we have thus made good progress again. The cycle route signage is a real concern for me and therefore I am expressly happy for all cyclists that new routes are signposted," says Councillor Oesterling.

"Our signposting crews are well utilized. Despite this, or perhaps because of it, cycle route signage enjoys a special status. After a short Christmas break, we continue to work in the old town, among other places," explains the head of the ASE, Michaela Kraft. After completion of the signage in the entire city area, around 6400 signs will be installed at approximately 3400 locations.