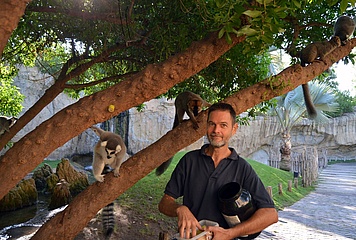 (pia) Since September 1, Miguel Casares is the new head of the scientific department of the Frankfurt Zoo and also deputy zoo director. The 50-year-old veterinarian is thus responsible for the scientific care of the animal population, consisting of about 4,500 individuals in about 450 species.

Frankfurt Zoo sees its central priorities in animal welfare and the preservation of global biodiversity, and accordingly Casares, a renowned scientist, takes the greatest care in keeping animals in a manner appropriate to their species, as well as in designing and setting up animal facilities. His responsibilities also include selecting which species to keep in the first place, as well as networking in international breeding programs to promote biodiversity conservation.

Head of the Department of Culture and Science Ina Hartwig is delighted with the new appointment: "With Miguel Casares, we can welcome an internationally experienced zoo expert who, as a highly qualified scientist and zoo developer, will influence and steer the content and also the structural design of Frankfurt Zoo in a decisive position in the future. I am very excited about his ideas for the further development of our zoo, which is Frankfurt's most visited leisure facility with
830,000 visitors last year."

Zoo Director Manfred Niekisch explains, "With Miguel Casares, we have been able to attract an outstanding zoo expert." Niekisch emphasizes the great international experience of the new deputy director.

Miguel Casares was born in Spain and received his doctorate from the University of Zurich after studying veterinary medicine. He became acquainted with the Frankfurt Zoo during a major curative internship in veterinary medicine. Over the course of 21 years, his professional stations led him through numerous international zoological institutions in Germany, Switzerland and Spain.

Since 2007, Casares was zoological director of the Biopark in Valencia, Spain, which he was instrumental in establishing in advance. Other zoos he has been responsible for developing include zoological gardens in Benidorm, Spain, and Casablanca, Morocco. The special feature of these zoos is the communal keeping and socialization of different animal species. Miguel Casares has initiated various scientific projects, for example a species conservation project on giant tortoises in Galapagos; he is currently pursuing a research project on non-invasive hormone diagnostics in elephants. His numerous publications and publications as well as his teaching activities as a scientist enjoy special recognition.

Miguel Casares' extensive professional experience has provided him with extensive knowledge of zoo-specific and business management concepts and strategies, and has allowed him to apply his leadership skills in numerous management roles.